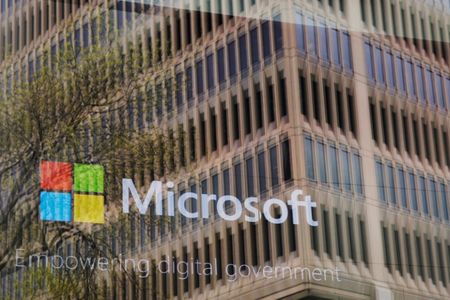 By Sagarika Jaisinghani and Medha Singh

Aug 3 (Reuters) – Wall Street’s main indexes were set to open higher on Monday as Microsoft’s pursuit of TikTok’s U.S. operations and a clutch of upbeat quarterly earnings reports lifted sentiment in the absence of a fiscal coronavirus relief deal.

Microsoft rose 2.7% before the bell as it said it would push ahead with talks to acquire the U.S. operations of Chinese-owned TikTok after President Donald Trump reversed course on a planned ban of the short-video app. distributor McKesson Corp (NYSE:) MCK.N gained 4.6% after raising its full-year earnings forecast, while Tyson Foods Inc (NYSE:) TSN.N rose 0.9% on topping quarterly profit estimates. have been a nice surprise,” said Stephanie Link, portfolio manager at Hightower Advisors in New Jersey.

“And not just bottom line, but the topline as well. Expectations got very very low, so obviously they were low hurdles to overcome, but it’s definitely on investors’ minds.”

With the U.S. corporate earnings season now past its half-way mark, a record high percentage of companies have beaten dramatically lowered forecasts, but the second quarter is still set to be the low point for earnings this year and the biggest quarterly decline since the financial crisis. earnings from tech behemoths and historic monetary and fiscal stimulus have lifted the S&P 500 to within 4% of its peak, but a recent wobble in macroeconomic data and a gridlock on more government stimulus has made investors cautious again.

After an extra $600-per-week in jobless benefits expired last week, the White House Chief of Staff Mark Meadows said on Sunday he was not optimistic about reaching an agreement soon for the next relief bill. jobless claims rising again, all eyes this week will be on the Labor Department’s employment report on Friday, which is expected to show far fewer jobs being created in July after a record surge in the previous month. a brighter note, an ISM survey of the manufacturing sector due later in the day is expected to show a slight pickup in July, mirroring upbeat factory activity data from Europe, the United Kingdom and China. most agree that the bottom in economic activity is behind us, … the way forward is likely to be bumpy as several U.S. states re-impose lockdown measures (and) this probably won’t show up in the data until the release of the August figures,” said Hussein Sayed, market strategist at FXTM.

Marathon Petroleum Corp (NYSE:) MPC.N jumped 9.9% after it sold its Speedway gas station network for $21 billion in an all-cash deal. Co CLX.N slipped 1.3% even as it beat quarterly sales and profit estimates on benefiting from higher spending on cleaning products during the COVID-19 pandemic.