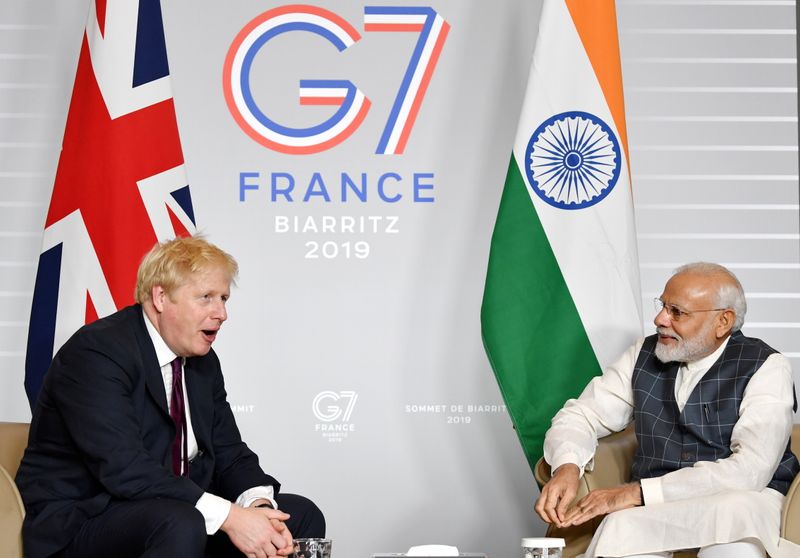 Johnson held a virtual meeting with Indian Prime Minister Narendra Modi, replacing a trade visit he had to cancel last month due to surging COVID-19 cases in India.

Britain, the world’s fifth largest economy, sees closer ties with India, the sixth biggest, as a key pillar of its post-Brexit push to seek trade and influence in the Indo-Pacific region and address growing Chinese dominance.

“The agreements we have made today mark the beginning of a new era in the UK-India relationship,” Johnson said in a statement. “The UK and India share many fundamental values… There is a living bridge uniting the people of our countries.”

The British government set out 533 million pounds of Indian investment into Britain, including 240 million by the Serum Institute for its vaccines and sales business, and 446 million pounds of export deals for British businesses.

A pact on migration sought to address friction between the two allies, in which Britain says there are too many Indians living illegally in Britain, and India says tens of thousands who come to Britain to study are denied job opportunities.

That deal will provide enhanced employment prospects for 3,000 young Indian professionals annually, in return for India agreeing to take back any of its citizens who are living illegally in the UK.

The investment announcement came alongside an “Enhanced Trade Partnership” agreement, and both sides committed to begin full trade talks in the autumn with the ambition to double existing bilateral trade by 2030.

The partnership deal will lift export barriers on goods ranging from British apples to medical devices, and open up India’s legal services sector to UK firms. In return Britain agreed to improve access to its fisheries and nursing sectors.

The challenges of reaching a trade agreement were underlined by separate news on Tuesday that the EU and India had agreed to restart trade talks which have been stalled since 2013.

Some of the investments announced by Britain on Tuesday had already been made public. British estimates combined with data from the firms involved showed the deals would create more than 6,500 jobs in Britain.

3 things that makes up a good health

AT&T Is Back to Being a Telecom Company. What It Means for its Stock, 5G, and for Streaming.

Can new tools predict flooding in Horry County before it even happens? What to know