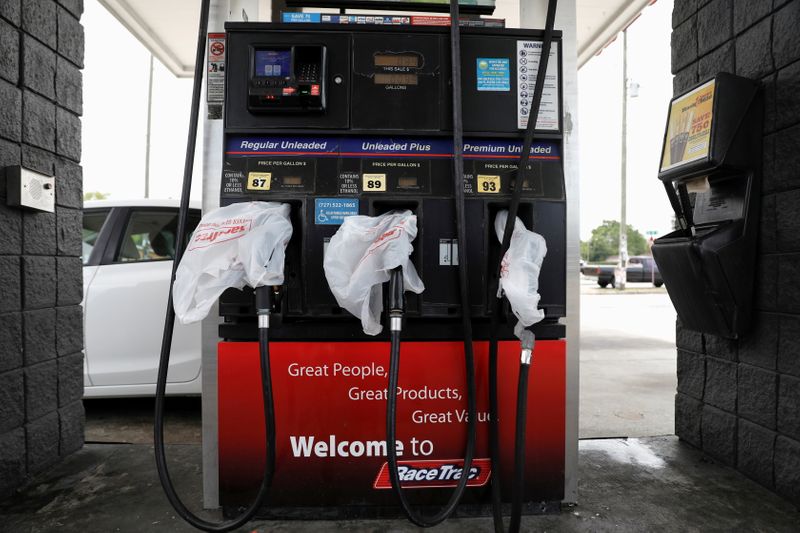 © Reuters. FILE PHOTO: Gas pumps are covered with plastic bags at the Race Trac gas station, after a cyberattack crippled the biggest fuel pipeline in the country, run by Colonial Pipeline, in St. Petersburg, Florida, U.S., May 12, 2021. REUTERS/Octavio Jones/File P

By Stephanie Kelly and Laura Sanicola

WASHINGTON (Reuters) -Washington was running out of gasoline on Friday, even as the country’s largest fuel pipeline network ramped up deliveries following a cyberattack and U.S. officials assured motorists that supplies would return to normal soon.

The six-day Colonial Pipeline shutdown was the most disruptive cyberattack on record. Widespread panic buying continued two days after the pipeline network restarted, leaving filling stations across the U.S. Southeast out of gas.

With more Americans taking road trips as pandemic restrictions ease, pump prices are at their highest in years. The average national gasoline price has climbed to almost $3.04, the most expensive since October 2014, the American Automobile Association said.

As politicians discussed legislation to improve cyber defenses, more gasoline stations shut down in the capital city of the world’s largest oil-consuming nation.

On Friday gas station outages in Washington climbed to 88% from 79% the day before, tracking firm GasBuddy said. President Joe Biden assured motorists supplies should start returning to normal by this weekend.

“Most of these states/areas with outages have continued to see panicked buying, which is likely a contributing factor to the slow-ish recovery thus far,” said GasBuddy’s Patrick De Haan. “It will take a few weeks.”

Colonial Pipeline announced late Thursday it had restarted its entire pipeline system linking refineries on the Gulf Coast to markets along the eastern seaboard.

Some states experienced modest improvements but still had a lot of gasoline outages. Some 65% of gas stations in North Carolina were without fuel, while in Virginia, South Carolina and Georgia just under 50% were empty, GasBuddy said.

Overall, some 14,144 gas stations were experiencing outages, down from a peak of 16,200, GasBuddy said on Friday afternoon.

In Washington, D.C., Dennis Li was stuck on Friday at a Sunoco gas station that was out of fuel. He had tried to find gas at four stations during the day, with no luck.

“I’m running on empty to the point where I don’t want to drive anymore,” said Li, who is from Annapolis, Maryland.

Minutes before the last of four stations ran out of gas on River Road in the Washington suburb of Bethesda, Maryland, drivers were mostly calm. Still, some were shocked to hear about the shortage.

Nicholas Swann had driven from his home in the Adams Morgan neighborhood of Washington to Bethesda to get gasoline, where the wait at the Shell (LON:) station was 15 minutes.

“We were originally going to drive out to the beach this weekend but we don’t know if we will, because I can’t make it there and back on one tank of gas,” Swann said.

The hacking group blamed for the attack, DarkSide, said it had hacked four other companies including a Toshiba (OTC:) subsidiary in Germany.

Colonial Pipeline has not determined how the initial breach occurred, a spokeswoman said. The privately held company has focused on cleaning its networks, restoring data and reopening the pipeline.

Colonial has not disclosed how much money the hackers were seeking or whether it paid. Bloomberg News reported that it paid nearly $5 million to hackers.

U.S. lawmakers reintroduced legislation to support efforts by the Department of Homeland Security to secure pipelines and pipeline facilities from cyberattacks.

Gulf Coast refiners that send fuel to market through the Colonial Pipeline have cut production because they have been unable to move gasoline, diesel and jet fuel through the line.

Steve Boyd, a senior managing director at Sun Coast Resources, estimated that with fuel moving on the line at half of Colonial’s regular speed, it will take 12 to 20 days for pipeline deliveries to reach the northern-most point Linden, New Jersey.

Colonial did not immediately respond to a request for comment on Boyd’s estimate.

In Georgia, one of the states worst hit by the outages, fuel delivery companies struggled to get supplies to gasoline stations.

“I don’t think we’ve seen the end of this by any stretch of the imagination,” said Deborah Latham, 67, who owns petroleum delivery company Georgia Tank Lines in Doraville, Georgia. She and her 40 drivers serve fuel stations all around metro Atlanta, including large sellers such as Kroger (NYSE:) and QuikTrip.

“We’re delivering what little fuel we can get our hands on,” Latham said. “But it takes three times longer to get it because of the (tanker truck) lines, and then at the stations, cars don’t get out of the way of our trucks so we can drop off fuel.”

‘I just forgot how to laugh’