Jeff Miller published a timely article over at www.dashofinsight.com this weekend. Jeff wondered aloud if it was time to do some hedging, and it was the right question given Monday’s action.

This blog’s article from last week – “Planning Ahead for a March, 2000, Moment” was timely, but let’s see what transpires. A correction is not necessarily a market top.

Michael Batnick wrote a great piece on the Ritzhotz Wealth blog entitled “Not Crazy Can Still Be Nuts” and it had a great table comparing key metrics of the 2000 Nasdaq peak and then today’s metrics in comparison: 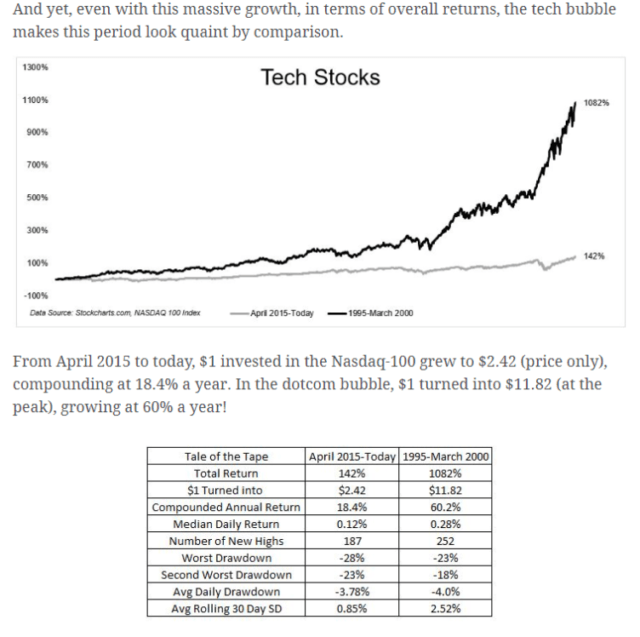 That is a great table. Be sure and read the whole article.

Finally, to leave you with a chart from Lawrence McDonald, the Bear Traps Report author and the writer of the book from the 2008 Crisis, Lehman Bros: the Colossal Failure of Common Sense. 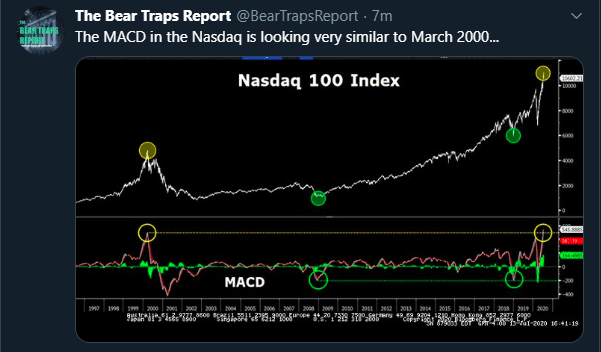 Summary / conclusion: Because so many are looking for a March, 2000-like moment, it probably won’t happen. Sentiment and breadth are nothing like late 1999 and early, 2000, but at least consider the possibility. The Technology sector today is nothing like the 1990s: my impression of the 1990s was that Microsoft (NASDAQ:MSFT), Intel (NASDAQ:INTC), etc. was the secular build-out of corporate technology, and the 2000s led to the advent of personal productivity technology like the iPhone, and mobile, social, etc. None of the Big 5 Tech companies today are really “new tech”. I consider “new tech” Twitter (NYSE:TWTR), Spotify (NYSE:SPOT), Tesla (NASDAQ:TSLA) (really Consumer Discretionary), Zoom (NASDAQ:ZM), and maybe even Beyond Meat (NASDAQ:BYND), which is momentum and a disruptor, but not tech. Most of the Big 5 have been seasoned and have survived a downturn.

Microsoft didn’t break above its 2000 high until late 2016. You could say its bull market is just barely 4 years old.

These are companies who haven’t yet seen the downside of a Tech cycle. Facebook (NASDAQ:FB), which came public in 2012 and is part of the Big 5, is seeing the first hit to revenue based on ad spending backlash.

This is just one opinion, and consider it as such.

Editor’s Note: The summary bullets for this article were chosen by Seeking Alpha editors.

‘Does Hitler own shares in Love Island?’ ITV is accused of aping dictator’s worship of Aryans