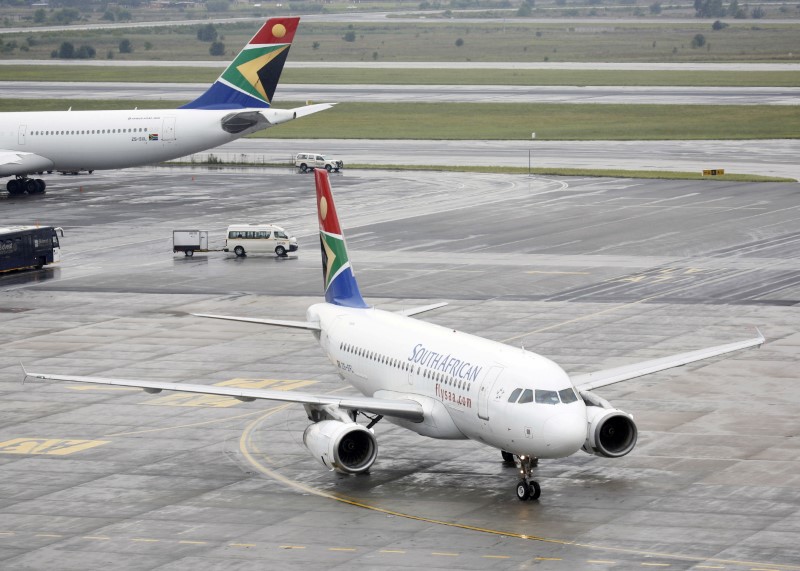 JOHANNESBURG (Reuters) -The South African government is selling a 51% stake in South African Airways (SAA) to Takatso consortium, which will initially commit more than 3 billion rand ($221.60 million) to give the struggling airline a new lease of life.

SAA has been under a form of bankruptcy protection since December 2019 but its fortunes worsened during the COVID-19 pandemic and all its operations were mothballed in September 2020 when funds ran low.

The airline is one of a handful of South African state companies that depend on government bailouts, placing the national budget under huge strain at a time of rapidly rising debt.

The partnership with Takatso will alleviate that financial burden, public enterprises minister Pravin Gordhan told journalists on Friday as the state would no longer provide any funding to the airline, which exited administration in late April after receiving 7.8 billion rand from the government.

Gordhan added that the government will retain a 49% stake with the intention of eventually listing the airline to address future funding requirements.

“The objective of bringing in an equity partner to SAA is to augment it with the required technical, financial and operational expertise to ensure a sustainable, agile and viable South African airline,” he said.

The airline’s subsidiaries will be evaluated, in particular Air Chefs, SAA Technical and the future of low-cost airline Mango, Gordhan said, noting that “anything can happen” when asked if some could be shut down.

SAA will continue to be domiciled in South Africa and the government will have a “golden share” of 33% of the entity’s voting rights and certain areas of national interest, Gordhan said.

In a statement, co-founder and consortium chair Tshepo Mahloele said it has the experience, expertise and capital to transform SAA into a substantial operating business.