A police officer who faced sexist and homophobic abuse about her hairstyle is Derbyshire’s first female chief constable.

Rachel Swann was mocked by cruel TV viewers who threw jibes at her spiked, dyed hairstyle on social media while she was at the centre of the Whaley Bridge evacuation last year.

Following a confirmation hearing by Derbyshire’s Police and Crime Panel, Chief Constable Swann was handed the top job and dubbed an ‘outstanding strategic leader’ with a ‘refreshing and positive approach’.

Derbyshire Constabulary – which controversially used drones to spy on walkers during lockdown – was previously headed by Peter Goodman, 53, who retired after a police watchdog probe into his personal conduct.

Goodman was referred to the Independent Office for Police Conduct days after the ‘stay at home’ restrictions were introduced. 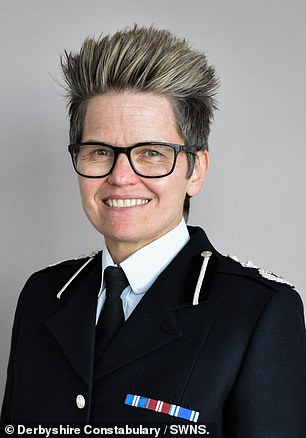 Rachel Swann, who faced sexist and homophobic abuse about her hairstyle (pictured in a 2019 news broadcast, right) is Derbyshire’s first female chief constable

The complaint related to an off-duty personal conduct matter. The IOPC carried out an investigation but ruled there was no breach of professional standards.

Mr Goodman announced his retirement from Derbyshire Constabulary just days later on May 6.

Swann – who was previously the force’s deputy chief constable – was picked as the preferred candidate to take over by Derbyshire Police and Crime Commissioner Hardyal Dhindsa in July.

She was the public face of a huge police operation to evacuate 1,500 residents at risk of drowning after the dam at Toddbrook Reservoir threatened to burst last year. 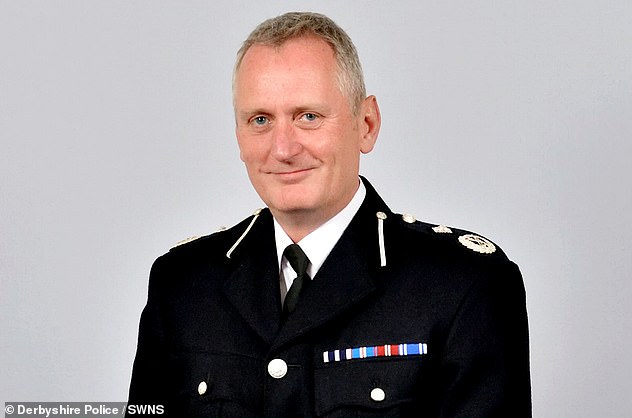 Derbyshire Constabulary – which controversially used drones to spy on walkers during lockdown – was previously headed by Peter Goodman, 53, (pictured) who retired after a police watchdog probe into his personal conduct

Chief Constable Swann said some of the abuse she received about her looks at the time was ‘misogynistic and homophobic’ and she took a temporary break from Twitter. She has since returned to the platform.

She told BBC Radio Derby: ‘I can take a bit of banter but it became sexist and homophobic, and really insulting.

‘The bit that really hurt was people saying I had no standards and I was letting policing down.’

She added: ‘Yes, I am a woman. Yes, I might have a slightly different hairstyle. Yes, I am quite small. I could not believe that my mere existence could cause such a depth of feeling.

‘Some comments were misogynistic and homophobic and the abuse has been recorded as a hate incident, just as for the public.’ 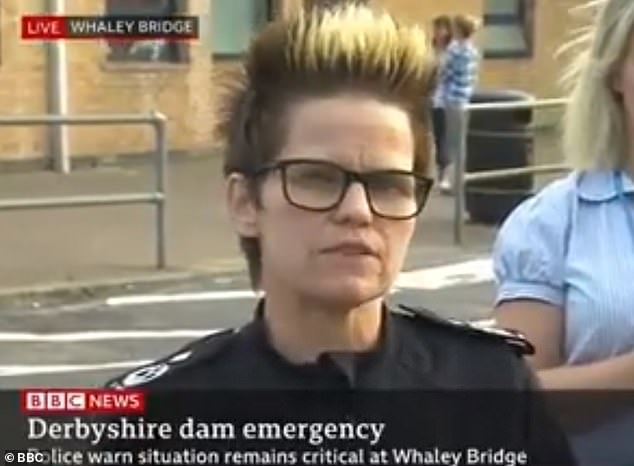 Chief Constable Swann (pictured) was the public face of a huge police operation to evacuate 1,500 residents at risk of drowning after the dam at Toddbrook Reservoir threatened to burst last year

One Twitter user said her hair was not ‘professional’ while another said she needed ‘a trip to the hair salon to celebrate’.

But other officers jumped to her defense with Bedfordshire Police Chief Constable Garry Forsyth writing: ‘Congratulations Rachel and Derbyshire Police.

‘One of the finest officers I’ve had the pleasure of working with and simply a superb leader. Enjoy the moment and all that comes with it. You’ve earned it and you deserve it.’

‘During my time as deputy I have seen just how remarkable the communities across the county are – from the incredible resilience of those in Whaley Bridge, to the brilliant community work during the flooding late last year, to the current unprecedented national Covid-19 emergency which has seen fantastic examples of our communities and partnerships pulling together.

‘Those same emergencies have also shown the incredible dedication and professionalism of the officers and staff that I am now so proud to lead.

‘I have, from former Chief Constable Peter Goodman, inherited a force that is well set to face the many challenges that policing faces in the modern age, that is moving towards better representing those communities that we serve, fighting crime, bringing offenders to justice and protect those most at risk from criminality and harm in its many forms.’

‘I’m absolutely delighted as I believe that she will be an exceptional Chief Constable, totally focussed on keeping our communities safe.

‘Her refreshing and positive approach to partnership working has also been put to the test in the most challenging of circumstances including the major incident at Toddbrook Reservoir and of course as leader of the Local Resilience Forum during the pandemic.

‘Most telling of all though was the overwhelming number of messages of support and positivity from her colleagues and peers when Rachel was announced as my preferred candidate.

‘She is now the first female Chief Constable of Derbyshire Constabulary and a diversity champion in her own right.

‘I am aware that she has inspired other young women to follow in her footsteps and join the police force and I am proud to have her on my team.

‘I am looking forward to working with Rachel and tackling the issues that matter most to Derbyshire residents.

‘I have every faith that her varied policing experience and proven strength in leadership across three East Midlands forces will ensure that policing in the county goes from strength to strength in the future.’