A funeral parlour staff member in personal protective gear prepares a grave for a Covid-19-related burial.

The true death toll linked to Covid-19 in South Africa could be 20 000 higher than the official reported fatalities, according to estimates prepared by researchers.

LIVE | All the latest coronavirus and lockdown updates

A News24 analysis of estimated excess deaths and official, reported Covid-19 data shows a clear correlation between the geographic and chronological spread of the coronavirus and researchers finding higher numbers of excess deaths.

A lower estimate based on forecasts informed by historical mortality, shows deaths could be understated by more than 15 000.

The estimates are prepared by the Burden of Disease Research Unit, made up of pre-eminent experts from the South African Medical Research Council (SAMRC) and the University of Cape Town’s Centre for Actuarial Research, and are published weekly.

The unit’s latest report, for the week ending 4 August, found that since 6 May an estimated 33 000 excess deaths had occurred nationally. The unit’s methodology is described in detail in its weekly reports, which are published on the SAMRC’s website.

Professor Debbie Bradshaw, the head of the unit, previously pointed out a strong correlation between the rise in excess deaths and the spread of the virus.

Bradshaw described a “huge discrepancy” between the reported Covid-19 deaths and the excess deaths found.

Based on these comments by Bradshaw, News24 conducted an analysis of the reported Covid-19 data and excess deaths from natural causes and found a strong correlation.

When weekly reported cases are plotted on a two-week delayed basis with the number of weekly excess deaths estimated by the unit, the trends are near mirror images.

The two-week delay accounts for delays in deaths being reported, as well as delays in the finding, testing backlogs and reporting of Covid-19 cases.

A representation of weekly reported Covid-19 cases in Gauteng was compared with the weekly estimated excess deaths in the province.

The excess deaths are plotted on a two-week delay to account for the variables as described. Experts cannot say for certain how many people have died from Covid-19 in South Africa. But the official death toll is clearly underestimating the deadly impact of the local epidemic.

Similarly, a strong correlation between the percentage of tests that were positive for Covid-19 and excess deaths was found when plotting the weekly totals on the same two-week delay. A similar trend is observed in every other province.

In the Western Cape, the correlation between reported cases and excess mortality is clear. When this analysis is considered in the context of emerging evidence that South Africa and other southern hemisphere countries are not experiencing a significant flu season this year, the sharp uptick in mortality raises concern over the under-reporting of Covid-19 deaths.

READ | For the first time in 36 years, there will be no flu season in South Africa

Based on publicly available information, a death is only reported as a Covid-19 death if a laboratory test confirming the diagnosis is obtained.

The unit’s estimated excess deaths have been described by a leading epidemiologist at the National Institute for Communicable Diseases as the most accurate measure of the impact of Covid-19.

When the excess deaths are compared with the reported Covid-19 deaths, the “huge discrepancy” described by Bradshaw is clear. It appears from the excess deaths that the Western Cape, which was hit harder and earlier than other provinces, maintained relatively accurate reporting of Covid-19 deaths. A discrepancy still exists, but the difference is much lower than in other provinces, for example in Gauteng: And the Eastern Cape: 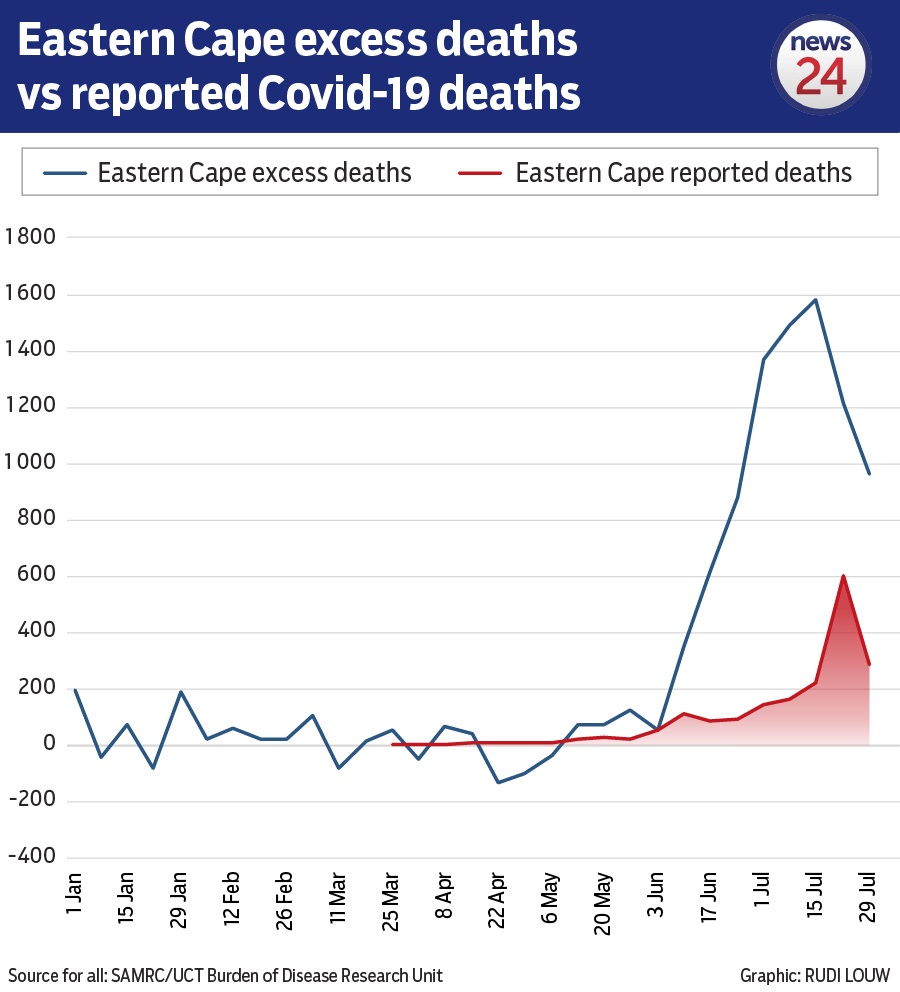 Excess deaths above expected and reported totals are being seen in every province, to varying degrees.

According to the unit, however, this comparison is not without its limitations.

“This comparison is hampered to some degree by the fact that the excess deaths are classified by week in which the death occurred; the reported Covid-19 deaths are classified by date the numbers are reported to the Department. If all excess natural deaths were due to Covid-19, and all Covid-19 deaths were perfectly identified and reported, the two series would be identical,” the latest excess mortality report reads.

“The number of estimated excess deaths has begun to decrease, consistent with the trend in the number of confirmed Covid-19 deaths. Although more data are needed on the underlying causes of death, this observation is strongly supportive that a significant proportion of the current excess mortality being observed in South Africa is likely to be attributable to Covid-19,” it adds.

Did you know you can comment on this article? Subscribe to News24 and add your voice to the conversation.