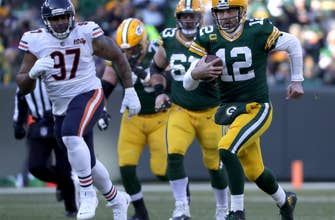 As poorly as things have gone for the Chicago Bears over the last month, they have a chance to close November by getting right back in the thick of the NFC North race.

If the Bears don’t capitalize on the opportunity, the Green Bay Packers will head into December well on their way to clinching a second straight division title.

Chicago (5-5) has lost four straight and trails the Packers (7-3) by two games as the teams renew the NFL’s oldest rivalry Sunday night at Green Bay.

“We’re fighters,” Bears running back David Montgomery said. “So if anybody’s counting us out, that’s fine. But we’re fighters, so we’re going to keep fighting.”

The Packers have their own issues.

After racing to a 4-0 start, the Packers have split their last six games. Green Bay has struggled lately at home with the pandemic preventing the Packers from allowing any fans to games.

In their last two home games, the Packers lost 28-22 to the Minnesota Vikings and eked out a 24-20 victory over the woeful Jacksonville Jaguars. The Packers are back at Lambeau Field after blowing a two-touchdown halftime lead in a 34-31 overtime loss at Indianapolis.

But the Packers still could gain a commanding three-game division lead by winning Sunday night in the first of two regular-season meetings between these teams. The Packers and Bears meet again Jan. 3 in Chicago to close the regular season.

“We’re on Sunday night football, it’s the only game playing at that time, it’s a divisional rival against the Bears and it’s a huge game in our division,” Packers defensive tackle Kenny Clark said. “If you’re not pumped up for this one, then I don’t know what to say to you.”

This game could feature another quarterback change for the Bears.

Mitch Trubisky was benched in favor of Nick Foles during the Bears’ third game and later injured his right shoulder. Foles injured his hip and glute in the Bears’ last game, a 19-13 loss to the Minnesota Vikings on Nov. 16.

Trubisky has been healthy enough to practice fully this week while Foles continues to recover. That makes Trubisky the most likely candidate to start Sunday’s game. Bears coach Matt Nagy said he’s liked the way Trubisky has responded since getting benched.

The Packers rank among the NFL’s most efficient teams in third-down situations. They are converting on 47.9% of their third-down attempts. Only Las Vegas, Kansas City and Buffalo have better third-down percentages.

Chicago is allowing its opponents to convert only 33.3%, giving the Bears the NFL’s best third-down defense. Packers coach Matt LaFleur says this will be the toughest defense Green Bay has faced.

“Khalil Mack is a game wrecker,” LaFleur said. “You better know where he’s at on every snap because, you know, he’s got the ability just by himself to go wreck whatever you’re trying to do.”

While the Bears have an uncertain quarterback situation heading into Sunday’s game, they’ll have to beat a two-time MVP quarterback who has dominated this series throughout his career.

Green Bay owns a 19-5 record against the Bears in games Packers quarterback Aaron Rodgers has started.

This will mark the Packers’ first home game with any spectators at all.

Packers officials have announced that team employees and their family members – about 500 people in all – will be in the stands to test out Lambeau Field COVID-19 protocols in case paying fans are allowed at home games later this season.

Montgomery sat out one game with a concussion but is expected to play Sunday night. Montgomery has rushed for a team-high 472 yards on 131 carries.

That’s a big addition for a team that severely lacks running back depth. Without Montgomery available, wide receiver/kick returner Cordarrelle Patterson had 12 of the Bears’ 17 carries in the Vikings game.

Patterson scored on a 104-yard kickoff return against the Vikings, enabling him to tie an NFL record with eight such touchdowns in his career. He shares the record with Josh Cribbs and Leon Washington.

Patterson, of course, can have the record all to himself if he scores on a kickoff return at Green Bay. The Packers have struggled on special teams lately, though their issues haven’t involved kickoff coverage. Darrius Shepherd fumbled on a kickoff return at Indianapolis. One week earlier, the Packers allowed Jacksonville’s Keelan Cole to score on a franchise-record 91-yard punt return.

STREAKS, STATS AND NOTES – The first of two matchups between the NFC North-leading Packers and second-place Bears. They’ll meet again at Chicago on Jan. 3 to close the regular season. … The Packers have won their last four home matchups with the Bears. Chicago’s last victory at Green Bay was a 17-13 triumph on Nov. 26, 2015. … The Bears and Packers faced off for the first time in 1921, making this the NFL’s oldest rivalry. … The Bears have lost four straight games after winning five of their first six. Bears coach Matt Nagy is monitoring the health of QBs Mitch Trubisky (shoulder) and Nick Foles (hip/glute). … Chicago’s Cordarrelle Patterson has scored on eight career kickoff returns to share the NFL record with Josh Cribbs and Leon Washington. Patterson has an NFL-leading 787 yards in kickoff returns this season. … Bears LB Roquan Smith has 70 solo tackles and 15 tackles for loss to lead the NFL in both categories. … Bears opponents have converted third downs a league-low 33.3% of the time. … Chicago TE Jimmy Graham, who played for the Packers from 2018-19, has a team-high five touchdown catches, which matches his two-year total with Green Bay. … Chicago’s Allen Robinson had over 100 yards receiving in each of the Bears’ games with the Packers last season. … Green Bay’s Davante Adams missed two games earlier this season with a hamstring injury but still has 10 touchdown catches, putting him in a tie for second place in the NFL behind Minnesota’s Adam Thielen (11). … The Packers lead the NFL in average time of possession (32:27). … The Packers have allowed only 12 sacks this season. Indianapolis and Pittsburgh are the only NFL teams to allow fewer sacks. … Green Bay has gone 19-5 against Chicago when Aaron Rodgers is the Packers’ starting quarterback. … The Packers are 5-0 this season when they’ve allowed 21 points or fewer. The Bears have exceeded 21 points in just two of their last seven games. … Packers assistant offensive line coach Luke Butkus is the nephew of former Bears LB and Hall of Famer Dick Butkus. Luke Butkus was the Bears’ assistant offensive line coach from 2007-09. … Fantasy tip: The Bears already rank next to last in the NFL in yards per game and have an uncertain quarterback situation, making this a good week to take a chance on Green Bay’s defense.

Biotin & Collagen Supplements For Brow Growth: What To Know

Robert Largan: Cutting Council Tax would do more to level up than cutting Corporation Tax

Inside the B.1.1.7 Coronavirus Variant