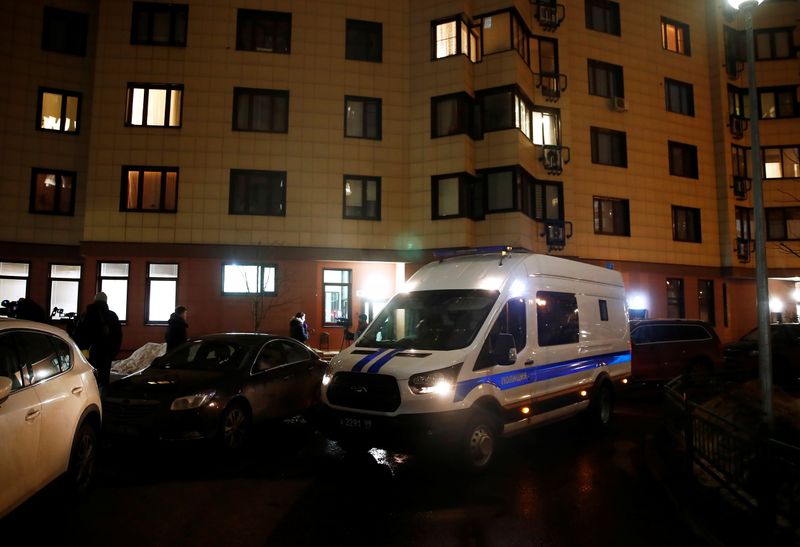 © Reuters. A police van is parked next to a building, where the apartment of Russian opposition leader Alexei Navalny is located, in Moscow

By Anton Zverev and Gabrielle Tétrault-Farber

MOSCOW (Reuters) – Police in Moscow detained Oleg Navalny, the brother of jailed Kremlin critic Alexei Navalny, and searched the homes of the opposition politician’s associates and other properties linked to him, his allies said.

Tens of thousands of people took to the streets on Saturday to demand that the Kremlin release Alexei Navalny from jail, where he is serving a 30-day stint for alleged parole violations, which he denies.

Police had said the protests were illegal and OVD-Info, a monitoring group, said officers had detained close to 4,000 people. Navalny’s allies plan to hold new rallies this Sunday.

Ivan Zhdanov, director of Alexei Navalny’s Anti-Corruption Foundation, tweeted that Oleg Navalny had been in his brother’s apartment as it was being searched.

Oleg Navalny was released from prison in 2018 after serving three-and-a-half years for an embezzlement conviction that critics say was designed to put pressure on his brother Alexei and smother dissent. Alexei Navalny was given a suspended sentence in the same case.

Zhdanov said police appeared to be conducting the searches as part of an investigation into calls to hold protests, which breached social distancing restrictions imposed because of the COVID-19 pandemic.

“They started breaking down the door,” he tweeted.

Zhdanov later said Oleg Navalny would remain in police custody for 48 hours on suspicion of violating sanitary and epidemiological regulations.

The Interior Ministry said in a statement earlier on Wednesday it had opened criminal cases against some of the participants in last week’s protests. It did not immediately respond to a request for comment about the searches.

Zhdanov later added that police had detained Ilya Pakhomov, an aide to Alexei Navalny, outside the opposition politician’s apartment.

Zhdanov also posted video taken at another apartment showing Yulia Navalnaya, Alexei Navalny’s wife, telling police to wait for her lawyer to arrive as they banged loudly at the door.

Navalnaya’s lawyer, Veronika Polyakova, was allowed inside the apartment by police after standing outside the door for several hours.

“It used to be that touching the family was against the code of honour,” Polyakova tweeted. “Now there is neither code, nor honour.”

Police also searched the home of Lyubov Sobol, an ally of Alexei Navalny who was detained at last week’s protests, and the offices of the Anti-Corruption Foundation, Alexei Navalny’s allies said. Photos on social media showed around 20 masked men waiting to gain entry.

Police took Sobol in for questioning as a witness but she was later ordered to remain in police custody for 48 hours, also for allegedly violating sanitary regulations, Navalny’s team said.

Alexei Navalny has not yet returned to his home since being poisoned and almost killed in Russia last summer. Last week, he was arrested at the airport as he returned to Moscow from Germany, where was treated and recovered.