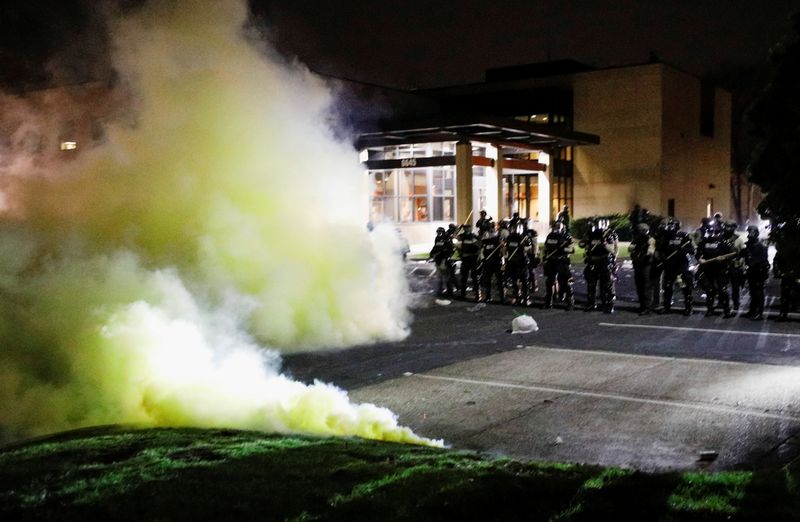 By Nicholas Pfosi and Jonathan Allen

BROOKLYN CENTER, Minn. (Reuters) -The fatal police shooting of a 20-year-old Black man in a Minneapolis suburb appeared to be an “accidental discharge” by an officer who drew her gun instead of her Taser during a struggle, the city’s police chief said on Monday.

The shooting on Sunday of Daunte Wright during a traffic stop triggered unrest in Brooklyn Center, Minnesota, with police firing tear gas and rubber bullets to disperse angry protesters who kept to the streets into the early Monday morning hours.

The attempted arrest of Wright, who police say was stopped due to an expired car registration, occurred not far from where the trial of Derek Chauvin, the former white Minneapolis police officer charged with murdering George Floyd, is taking place.

Video footage presented at a news briefing on Monday showed a struggle between Wright and the officer. Wright then got back into the car and an officer could be heard yelling “Taser, Taser, Taser,” as officers are trained to do before using the nonlethal weapon. She then fired a single bullet into Wright from her handgun, Brooklyn Center Police Chief Tim Gannon said.

Gannon added that the investigation was in its early stages and based on a preliminary police review of the video evidence.

“This appears to me, from what I viewed and the officers’ reaction and distress immediately after, that this was an accidental discharge that resulted in the tragic death of Mr. Wright,” Gannon told a briefing.

Wright’s mother, Katie Wright, had told reporters on Sunday she had received a call from her son on Sunday afternoon telling her that police had pulled him over for having air fresheners dangling from his rear-view mirror, which is illegal in Minnesota. She could hear police tell her son to get out the vehicle, she said.

The officer’s identity was not disclosed. Gannon described her only as a “a very senior officer.”

Brooklyn Park Mayor Mike Elliott said the officer, who has been placed on administrative leave, should be fired.

“My position is that we cannot afford to make mistakes that lead to the loss of life of other people in our profession,” said Elliott. He said he fully supported relieving the officer of her duties.

Elliot noted that the incident coincided with the Chauvin trial, which had forced a reckoning over the death of Floyd.

“I want to say that our hearts are aching right now,” Elliott said. “We are in pain right now. And we recognize that this couldn’t have happened at a worse time.”