Two people have been airlifted to hospital with ‘serious injuries’ and five more hurt today after a huge gas explosion destroyed a house in Kent, sparking a huge fire as firefighters pulled trapped survivors to safety.

Neighbours said the blast in Ashford ‘shook’ the whole street at just before 8am, with seven fire engines racing to the scene.

An elderly couple lived in the house, according to Graham Galpin, a Conservative candidate for Kent County Council. He said a ‘heroic’ man managed to pull some people from the wreckage.

Several people were trapped inside the £350,000 mid-terrace house before being rescued, police said, and officers are now urgently trying to see if anyone else is missing.

Dramatic video showed flames and smoke billowing from the property as a policeman shouted at passers-by to stay away.

Pictures afterwards revealed a smoking ruin with a single chimney stack standing among twisted wreckage and rubble strewn across the street and the gardens of surrounding houses. 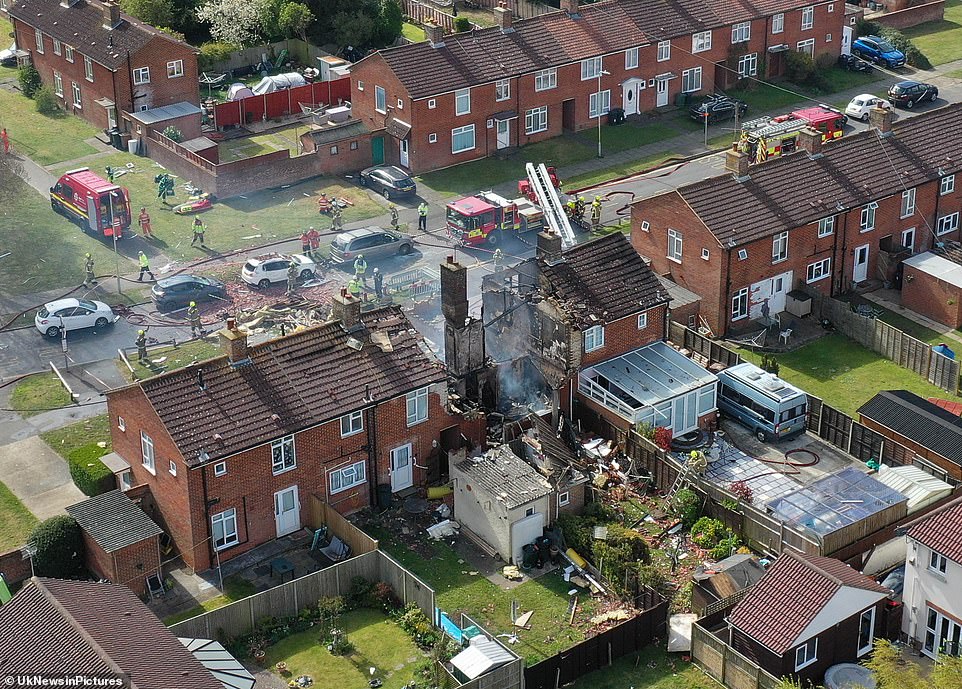 Neighbours described how the explosion in Ashford ‘shook’ the whole street at just before 8am, with seven fire engines racing to the scene. Pictured: An aerial photo of the destroyed house 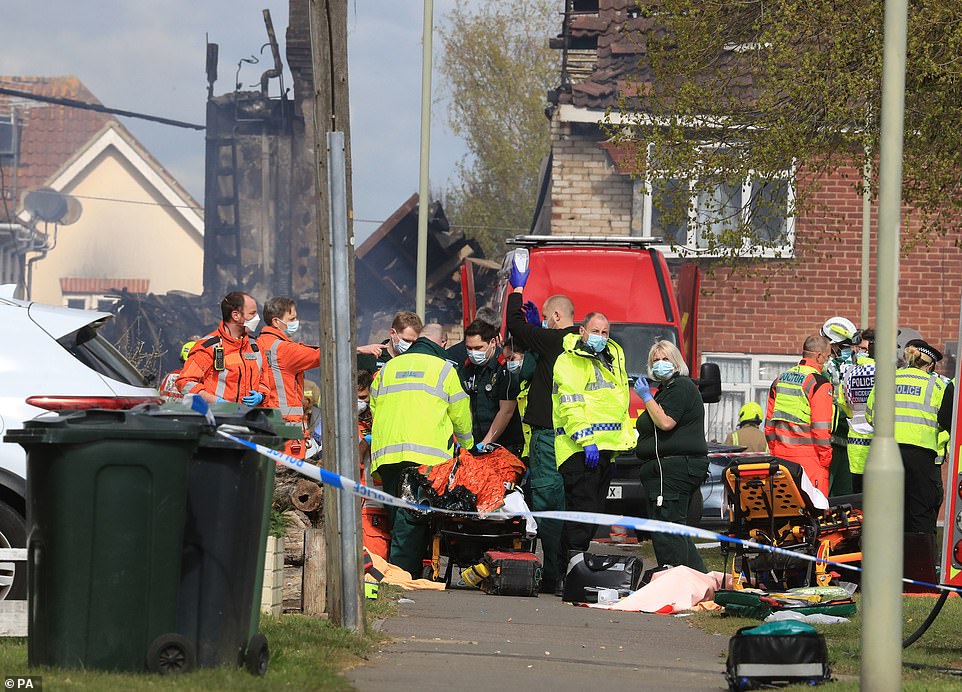 Several people were trapped inside the £350,000 property before being rescued, police said, with paramedics treating casualties at the scene 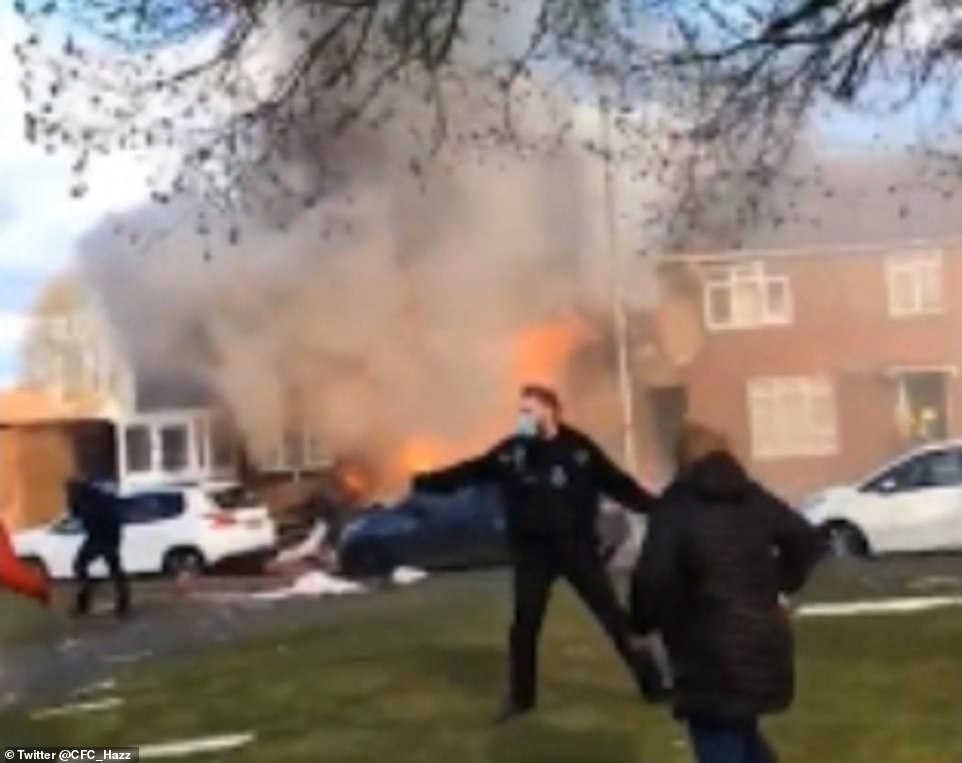 Dramatic video shows flames and smoke billowing from the house in Ashford, Kent as police urge passers-by to stay away

Chantal Weller, a local resident and journalism student, said she felt her house shake at 8am ‘like something had literally flown into the side of it’.

The 20-year-old, who lives on the road adjacent to the house explosion, said: ‘It didn’t make a lot of noise, but there was a big shudder.

‘I looked out the window and saw a lot of people looking down the road and looking worried.

‘I walked out onto the street and could see lots of police cars whizzing past down Osborne Road to get to the house. There were people everywhere because of the school run.’

She said the scene was ‘hectic’ with people panicking, but it had calmed down as the fire was brought under control.

An evacuation zone was set up around the house, approximately 200  yards in each direction.

‘I can’t see any smoke coming from the house anymore, so I think they have got the fire under control,’ she added.

Graham Galpin, Conservative candidate for the area, said: ‘It is a central house in a block of three which we believe belonged to an elderly couple.

‘I think there was an act of heroism where a man pulled some people from the wreckage. He was very shaken up by what he saw.

‘Somebody told him there were other people in there but he couldn’t get back inside. Unfortunately there are casualties I believe.

‘This is a close community and this tragedy will absolutely shock the people that live here.’

Cllr Steve Campkin, who represents the ward for the Green Party, added: ‘They’ve closed most of the road off as there’s a risk of asbestos.

‘The house is completely gone. It’s absolutely awful. Emergency services have been absolutely magnificent. We’ve opened up the two churches for teas and coffees for them and those who have been evacuated.’ 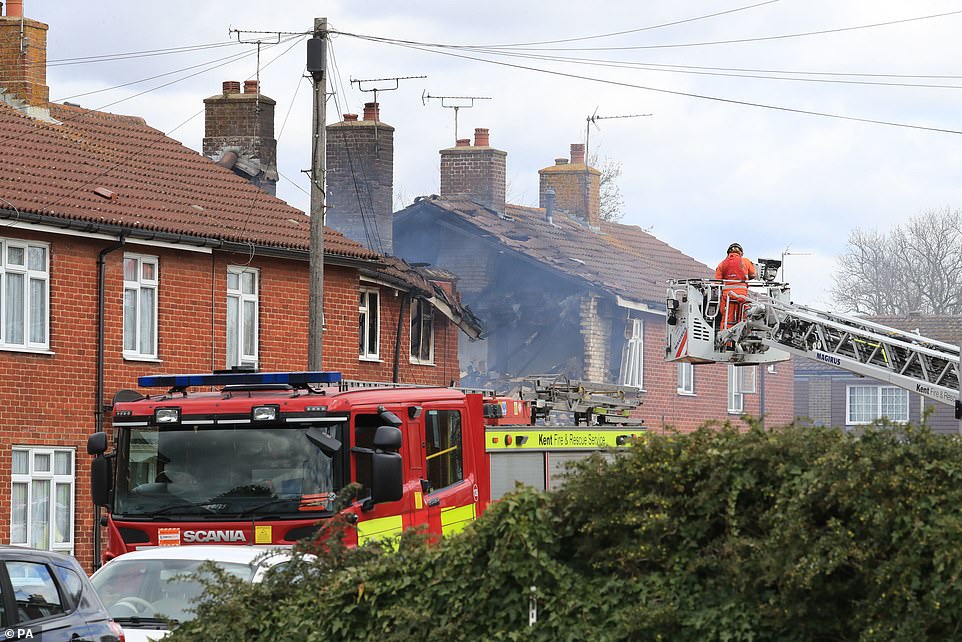 Emergency services examining the charred remains of the property, which was destroyed by the explosion just before 8am 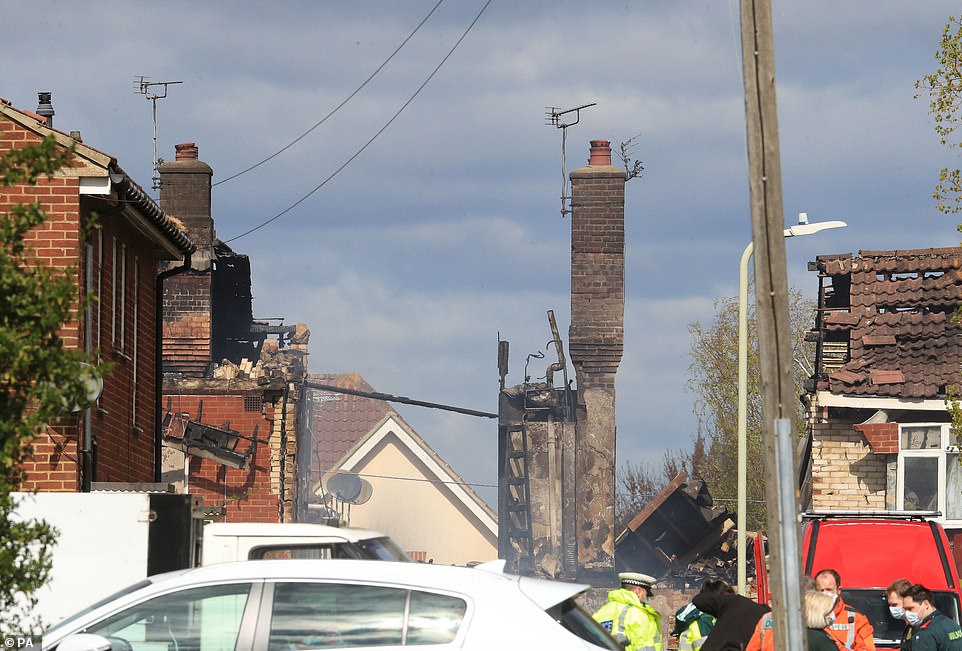 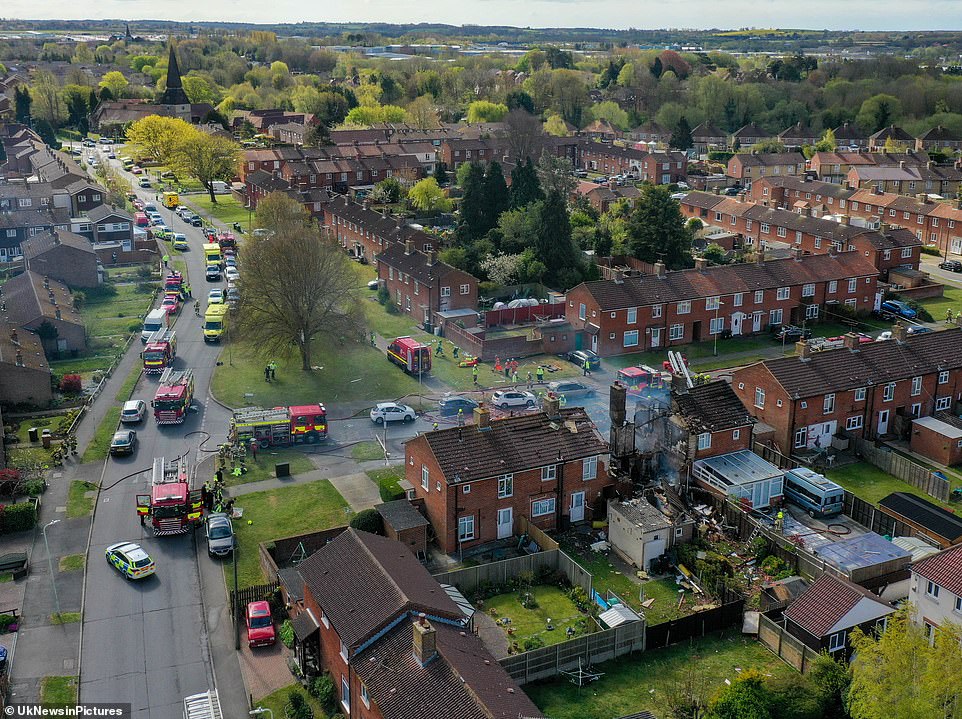 The scene in Ashford, Kent today as shown from the air, with seven fire engines and large numbers of police cars and ambulances in attendance

Canvassing has been suspended for the day ahead of local elections in light of the major incident.

A police helicopter can be seen hovering overhead and a red air ambulance from London was drafted in to help the Kent, Surrey and Sussex Air Ambulance team.

Officers have been warning neighbours to keep windows and doors shut while anyone walking outside is being asked to wear a mask – not for Covid but due to the airborne asbestos being present in the air.

The charred shell of a mid terrace property can be seen from the police tape.

A neighbour tweeted: ‘Huge gas explosion on my road, front of the house is completely gone’.

Kent Police said: ‘Officers from Kent Police are currently working alongside colleagues from Kent Fire and Rescue Service and South East Coast Ambulance Service after being called to a report of an explosion in Mill View, Willesborough, Ashford at 7.57am on Tuesday.

‘A number of people were reported to have been trapped and they were freed by emergency services. Officers are working to establish if anyone else is unaccounted for.

‘Officers are advising people to avoid the area and asking local people to keep their windows closed.’ 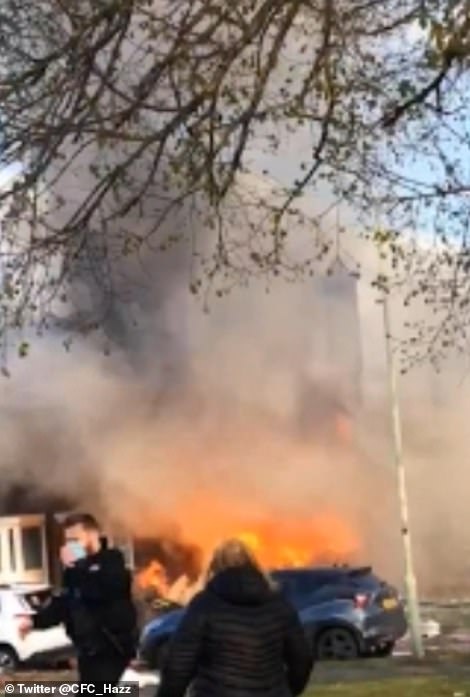 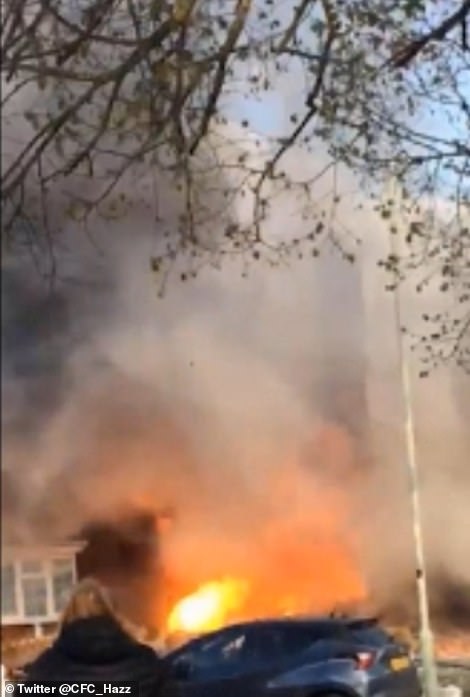 Several people were trapped inside the £350,000 property before being rescued, police said, and officers are now urgently trying to see if anyone else is missing

A Kent Fire and Rescue Service spokesman said: ‘Crews are working to extinguish any remaining signs of fire following an explosion at a house in Mill View, in Willesborough, Ashford.

‘Seven fire engines and a height vehicle are at the scene, as well as a team from the Technical Rescue Unit.’

An ambulance spokesman said: ‘We can confirm our attendance at an incident in Mill View, Willesborough, Ashford, following an explosion reported to us shortly before 8am today (4 May). Ambulance crews including our Hazardous Area Response Team (HART) have attended the scene along with police and fire colleagues. The air ambulance service also joined us at the scene.

‘We remain at the scene in support of our emergency service colleagues.’ 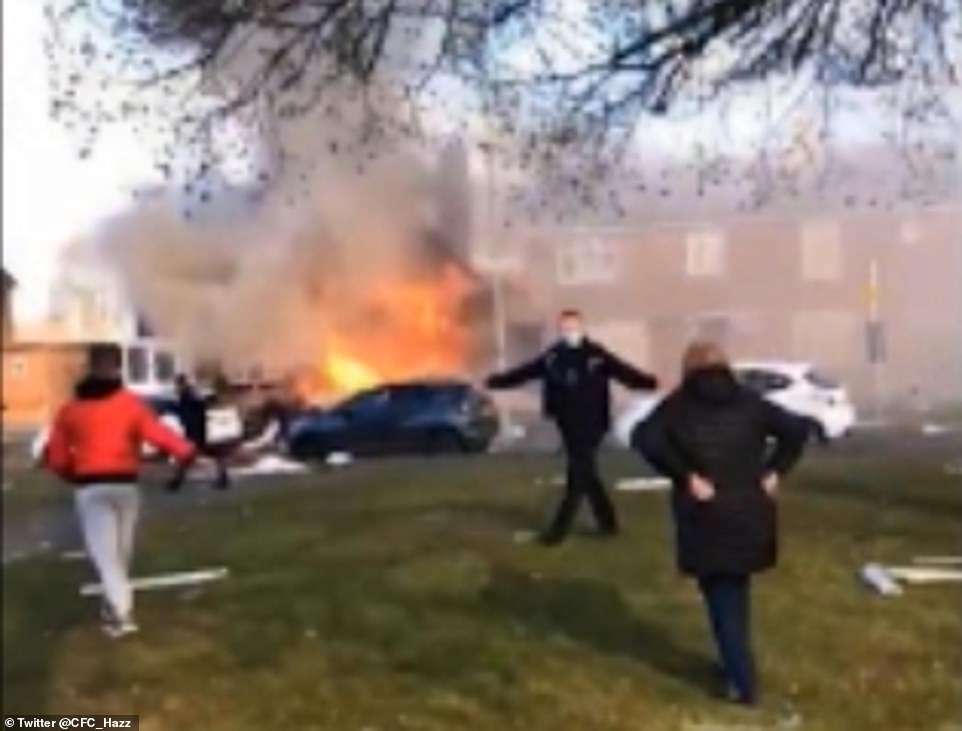 The one tip for lawns that will transform your whole garden

The one tip for lawns that will transform your whole garden