His jaw was clamped shut, his shoulders forced back and his legs were wrapped together tighter than two pythons strangling a gazelle.

Along his upper lip, a thin film of sweat glistened under the piercing hot studio lights. I’m no body language expert but when Sir Keir Starmer popped up on the BBC Breakfast sofa yesterday morning my first thought was… tense!

Stiffer than whipped meringue peaks. A man on the defensive. But then could you blame him?

The Breakfast Show format is not Sir Keir’s domain. It requires a relaxed, showbizzy touch a la Blair or Cameron, which he hasn’t mastered. 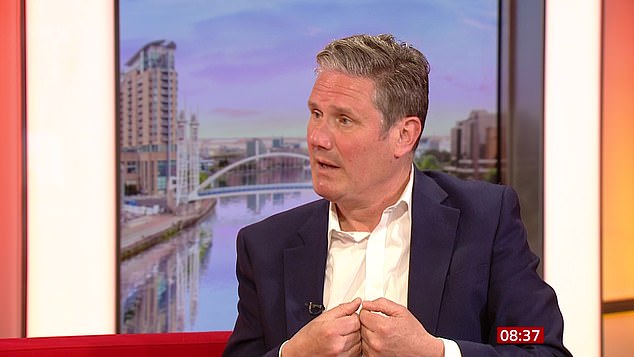 Worse than that, though, he’d just woken up to a poll claiming the Conservatives held a 17-point lead in tomorrow’s Hartlepool by-election.

In his first audition with the electorate, it seems increasingly likely that humiliation looms.

One minute 12 seconds. That was how long it took for Labour’s leader to trot out his first excuse. Interviewer Louise Minchin, she of the wan smile and occasional matronly glare, had barely dispensed with the pre-match pleasantries and already Starmer was dampening his party’s expectations.

He’s been handed a ‘huge mountain to climb’ he said after voters rejected Jeremy Corbyn’s crackpot manifesto in 2019. A manifesto, of course, that Sir Keir had been only too happy to campaign on. Travel restrictions also meant he hadn’t been able to get out and about. ‘Forget about kissing babies, I haven’t shaken the hand of a single voter,’ Sir Keir complained.

Considering that disastrous pub trip not long ago when he was ambushed by the owner and forced off the premises, this has been no bad thing.

A harder-nosed interviewer might have scoffed at all this. Instead, Minchin treated Sir Keir’s responses with respectful nods in the manner of a kindly GP listening to a patient reel off his ailments.

She asked Starmer if he would resign should Hartlepool turn blue on Friday.

An immediate ‘no’ might have been sensible. Instead, he blathered on about how he’d always taken responsibility when he was Director of Public Prosecutions, presumably to remind viewers of his big-shot legal career. 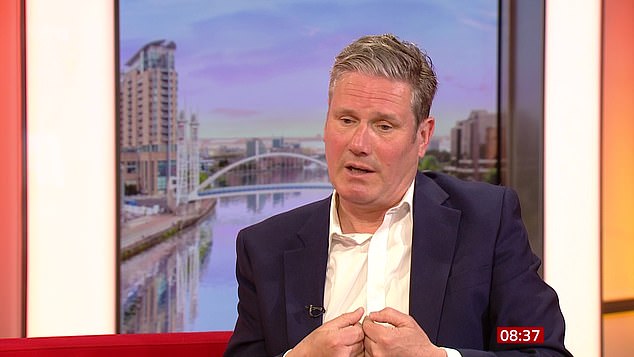 Asked again, he again declined to answer. The beards of the union big-wigs must have been twitching excitedly. They want to install Corbynista Zarah Sultana as his replacement, as if that’s an answer to anything.

Turning the ratchet, it was put to Sir Keir than even members of his own Shadow Cabinet didn’t know what their party stood for. A good communicator at this point might have summoned up the brass band and wheeled out some rhetoric. But Sir Keir’s cogs just whirred lifelessly, robotically spewing out dense proposals to get more people in to work. Yawn!

We moved on to the Downing Street flat refurbishment furore. Minchin suggested Sir Keir had misjudged the public mood. Sir Keir disagreed. ‘We need to clean up Westminster,’ he said firmly, pointing out that it was he who led prosecutions during expenses scandal.

Indeed he did. Though it’s possibly worth noting that all four MPs who were jailed were from the Labour Party.

Much of the criticism levelled at Labour is that the party has lost sight of the concerns of its working-class voters.

So when Minchin asked about his decision to undergo unconscious bias training in light of the Black Lives Matter protests, I expected Starmer to try to yank the interview in another direction. 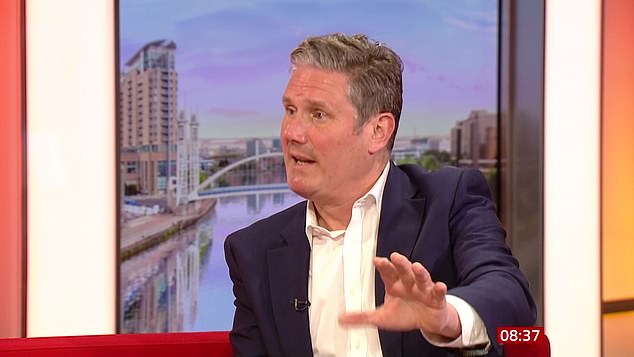 Not a bit of it. He loves all this stuff. All those seminars and webinars with their gobbledeegook and psychobabble.

Did he think everyone should undergo such training? ‘I don’t think it’d be a bad idea,’ Sir Keir replied.

Ye Gods. Hartlepool voters watching at home must have been spluttering on their PG Tips. The local Conservative Association probably can’t believe their luck.

As Sir Keir shot the camera a final awkward smile, Louise ushered in the weather report. There was talk of more high winds approaching the North-East coast.

In Hartlepool, Labour, too, look set for a battering.