Explainer-Scotland’s difficult route to another independence referendum By Reuters 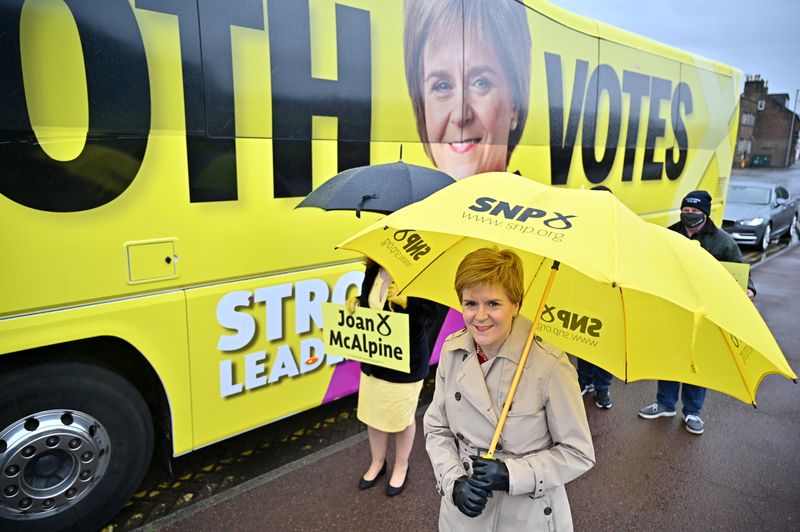 LONDON (Reuters) – Scottish independence supporters are calling Thursday’s election the most important in the nation’s history as they vow that if they win a majority in the devolved parliament, they will push for another referendum on breaking from the United Kingdom.

The Scottish National Party (SNP) is close to controlling the devolved parliament – knows as Holyrood – outright in Thursday’s election.

The only time the SNP have won a majority before in 2011, Britain’s then-Prime Minister David Cameron bowed to pressure and agreed to a referendum in 2014. Scots then voted by 55-45% to remain in the more than 300-year-old union.

However, even if they win a majority, there are no defined rules for how Scotland can force another referendum. The British government says the law means that Scotland would require the permission of the British parliament, and Prime Minister Boris Johnson has repeatedly said he will reject any such demand.

Without a clear democratic path to another referendum, the SNP will need to exert political, moral, or legal pressure to force another vote.Below are some of the paths to Scottish independence:

If the SNP – along with the Greens, who also support independence – win a majority, they will claim they have an undeniable right to hold another referendum. Regardless of the result, Johnson is expected to turn down any request. He has said the issue was settled seven years ago and the next one should not be held until the 2050s.

This will result in “political trench warfare” between the Scottish and British government over who has the power to call a referendum, according to James Mitchell, a professor of politics at Edinburgh University.

Mitchell said the independence movement will make angry demands and use street protests and political stunts to highlight what they say is Scotland being denied the right to decide its future. “It will be very heated,” he said.

There is broad acceptance among British political leaders that Scotland, which joined with England in 1707, cannot be trapped forever against its democratic will.The risk for the British government is by denying a referendum it may increase support for Scottish independence.

Scotland’s leader Nicola Sturgeon has said that if the SNP wins a majority and COVID-19 pandemic is over, she will pass legislation to hold a new referendum by the end of 2023. She will then dare the British government to challenge the decision in the courts.

Under the Scotland Act 1998 – which set up the Scottish parliament – “the Union of the Kingdoms of Scotland and England” is a matter reserved for Britain’s parliament.However, the matter has never been tested in court and lawyers and academics disagree over whether the Scottish parliament could have the power to call a referendum.David Hope, former deputy president of the UK Supreme Court, said the Scotland Act was a major constraint on the Scottish government: “They are trapped within a statute which is very carefully drafted.”Others think it is not so clear-cut. “There are respectable arguments for saying that a referendum bill would be within devolved competence,” said Professor Aileen McHarg, an expert on constitutional law at Durham University.

Sturgeon has previously said she would only seek to secede from the United Kingdom through a legally agreed referendum.

She is facing pressure from some nationalists to abandon this strategy and to call a referendum without the British parliament’s permission. But unionists could boycott this vote and claim the result lacks legitimacy.

If the independence movement was to hold a referendum without the consent of the British government, it could also struggle to gain international recognition if it won.

That would mirror the situation in Spain over Catalonia four years ago, when the regional government held an independence referendum that the central government said was illegal.

Michael Keating, a professor of politics at the University of Aberdeen, said that if the pro-independence parties keep winning elections, the British government will eventually have to back down. The union is based on the principle that any country could leave if it wants, he said.

“If people keep voting for nationalist parties, how can you tell them they don’t want another referendum?” he said. “You can’t keep saying no forever.”

Conservatives Are Lining Up To Primary Anti-Trump Cheney In Wyoming