A hoodie-wearing Matt Hancock was spotted playing rugby with his sons in the park yesterday in the second time he was seen outside this weekend following Boris Johnson‘s urgent plea for the public to ‘stay at home’.

The Prime Minister released a video on Friday calling on the public to ‘think twice’ before leaving the house as he moved to cool rising optimism amid a drop in daily infections and the vaccination of more than 3.5million people.

He urged everyone to behave as if they have coronavirus, warning that asymptomatic ‘silent spreaders’ are unwittingly fuelling the crisis and the next person infected ‘could be you’.

But his sobering clarion call did little to put off crowds who headed to public parks – including the Health Secretary who was seen by a passer-by playing an energetic game of rugby with his two young sons on Sunday.

The Health Secretary was seen scoring a try as the boys tried to tackle him at the park in north London. But his handling left a bit to be desired… as he was seen dropping the ball several times.

The day before, the Tory MP was seen casually walking through the park while clutching a rugby ball and wearing similar muddy attire.

Lockdown rules state that people can leave their homes for exercise by themselves, with the people they live with or with a legally-permitted support bubble. Official guidance does not rule out ball sports. 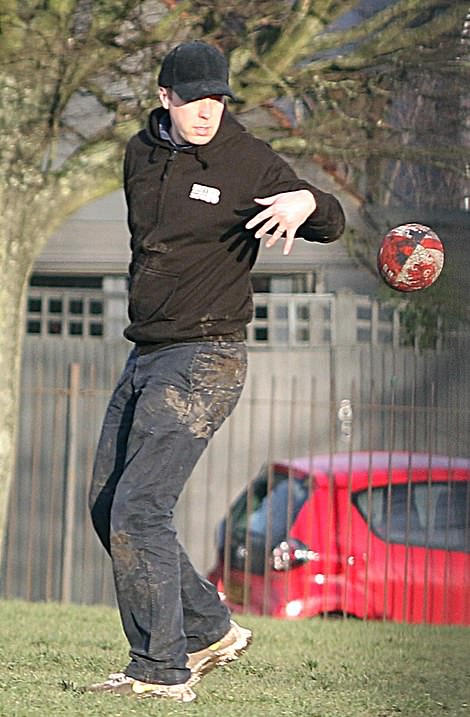 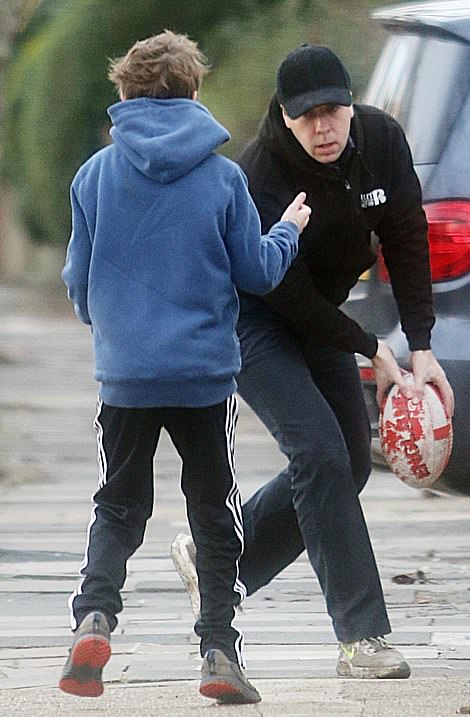 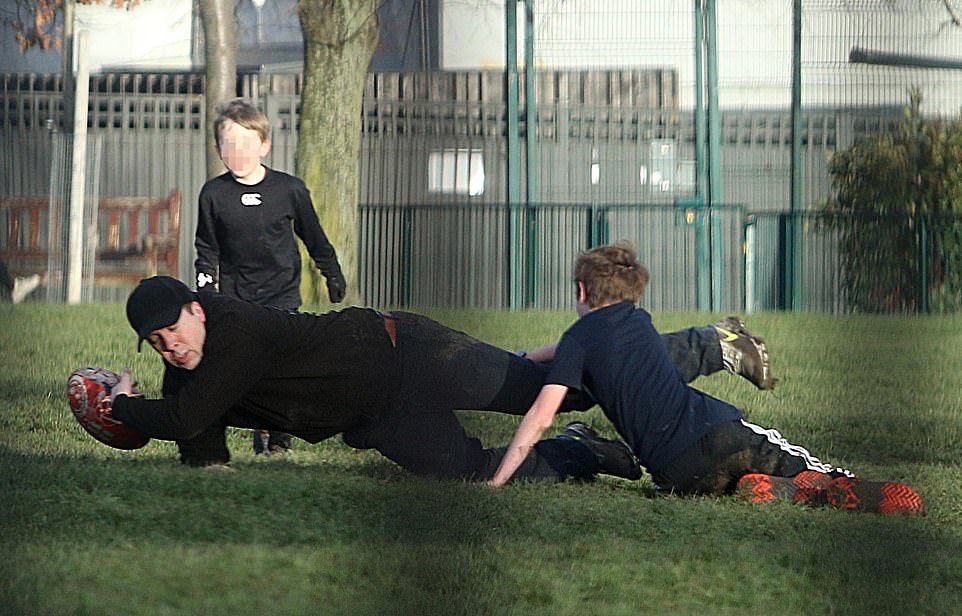 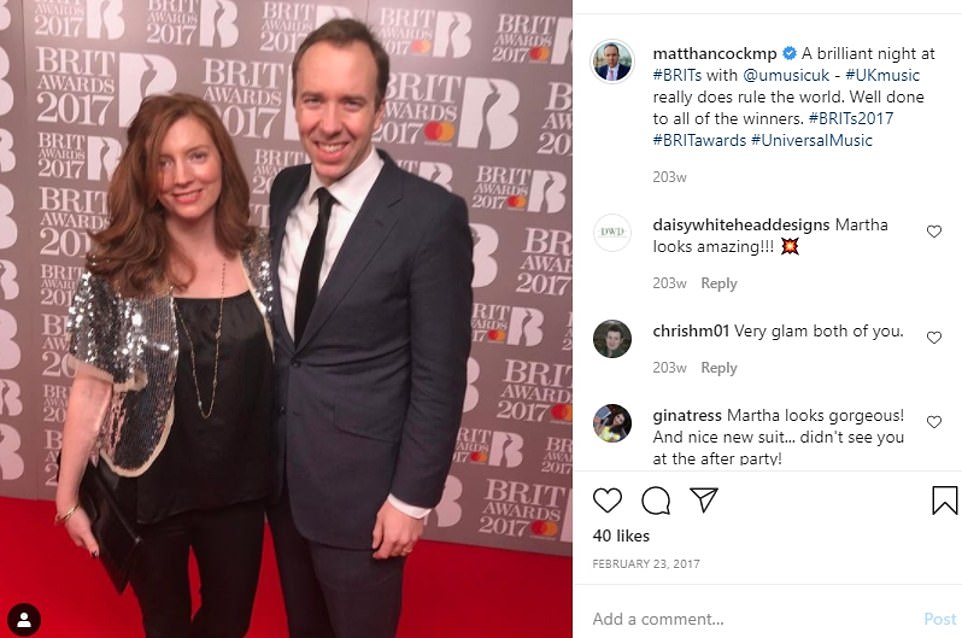 Mr Hancock lives in North London with his wife, Martha (they are pictured at a Brits award event in February 2017) 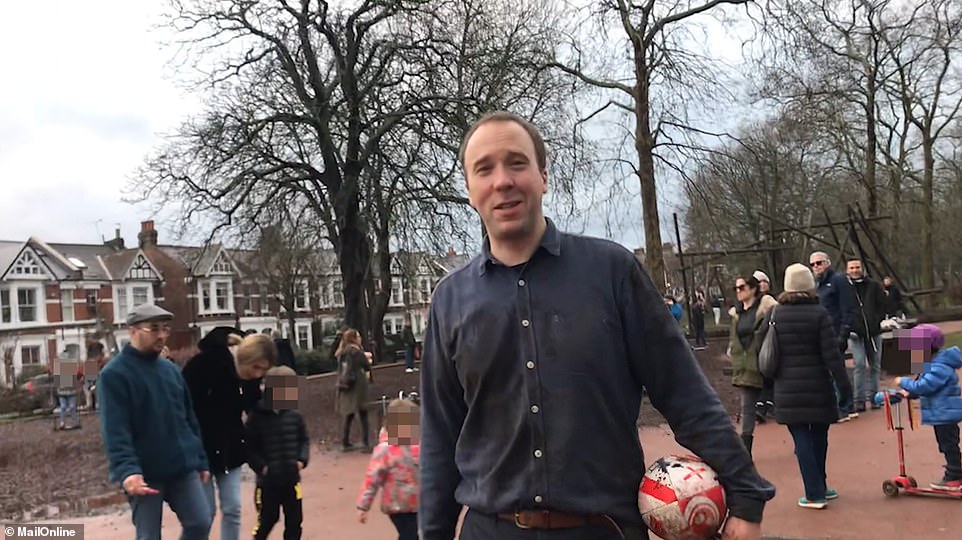 He day before, on Saturday, the Health Secretary was seen casually walking through Queen’s Park in North London while clutching a rugby ball

During the first video on Saturday, Mr Hancock, who was not wearing a mask, smiled as a member of the public who remarked at how ‘muddy’ he is.

The witness told MailOnline: ‘I was there at about 3.30 this afternoon… Suddenly I saw Matt Hancock, he was there playing rugby with his son I think. He walked right up to me and I saw he was covered head to toe in mud.’

While rugby is a favourite of his boss, the Prime Minister, father-of-three Mr Hancock is instead known for his cricketing prowess and plays for the parliamentary side.

Ministers are launching an advertising blitz to hammer home the importance of sticking to lockdown rules while the biggest vaccination drive in British history paves a path out of the pandemic.

But people are continuing to flout the rules, with a woman filmed being kicked out of Sainsbury’s for refusing to wear a face covering and four people fined for driving 50 miles to ‘look at the snow’ before crashing.

Footage filmed at the supermarket in Dartford on Saturday shows the unnamed shopper arguing with two officers and claiming they could not ask her to show proof of her ‘disability’.

She asked them ‘are you doctors?’ before producing a sheet of paper printed at home that she wrongly believed proved her point and saying ‘I’ll be taking you to court’.

The female officer replied ‘see you in court then’ as she and her colleague led the woman out into the car park.

Meanwhile, on Saturday, officers stopped four people from different households who travelled to a Peak District beauty spot to enjoy the wintery scenes before sliding off the road during the journey.

Derbyshire Constabulary said the BMW driver lost control of the car and rolled on its side near Bamford, in the Peak District, Derbyshire after travelling from St Helens in Merseyside.

The force said: ‘The four vehicle occupants were from different households. Is this essential? No. All were issued with Covid 19 tickets.’ No one was injured.

The most recent figures showed police officers in England have now handed out 28,744 fines since the start of lockdown in March, with 80% going to flouters aged between 18 and 39.

The latest evidence of lockdown flouting comes as a senior police officer criticised the government for its approach to enforcing lockdown rules, saying that ministers had been giving ‘damaging’ mixed messages.

Martin Hewitt, the head of the National Police Chiefs’ Council, said working with government had been ‘pretty challenging’ and ‘at times tense and difficult’. 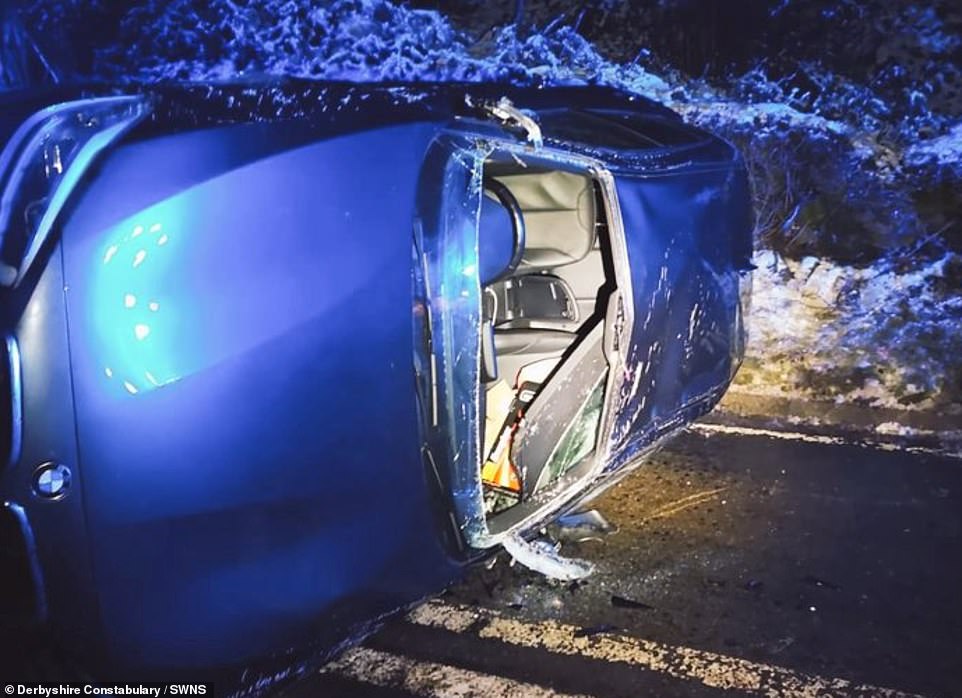 On Saturday, officers stopped four people from different households who travelled to a Peak District beauty spot to enjoy the wintery scenes before sliding off the road during the journey

In a speech to the London College of Policing in December, he said: ‘We’ve pushed really hard, not always successfully, to get consistent messaging and management of expectations out of government,’ he said.

Boris Johnson, Michael Gove and Robert Jenrick have all been forced to admit to getting the rules wrong in TV interviews.

NPCC chief Martin Hewitt criticised the government in a speech he gave before the third national lockdown.

He referred to the ‘challenge’ of enforcing different rules as they constantly changed with the course of the pandemic.

He said the police had asked the government to make these changes ‘as clear and unambiguous as they could be’ but had sometimes delayed enforcing new rules until they had the specific guidance.

‘On some occasions, we did not start policing a new regulation, until we had got the guidance out,’ he explained.

It came Mr Johnson today faced a backlash today over a ‘postcode lottery’ in vaccinations today as millions of 70-somethings are offered jabs – even though some older people have yet to get theirs.

Another five million people are being invited to receive their first dose, with some in Whitehall suggesting the rollout is going so well that the wider population could be covered by June rather than September. 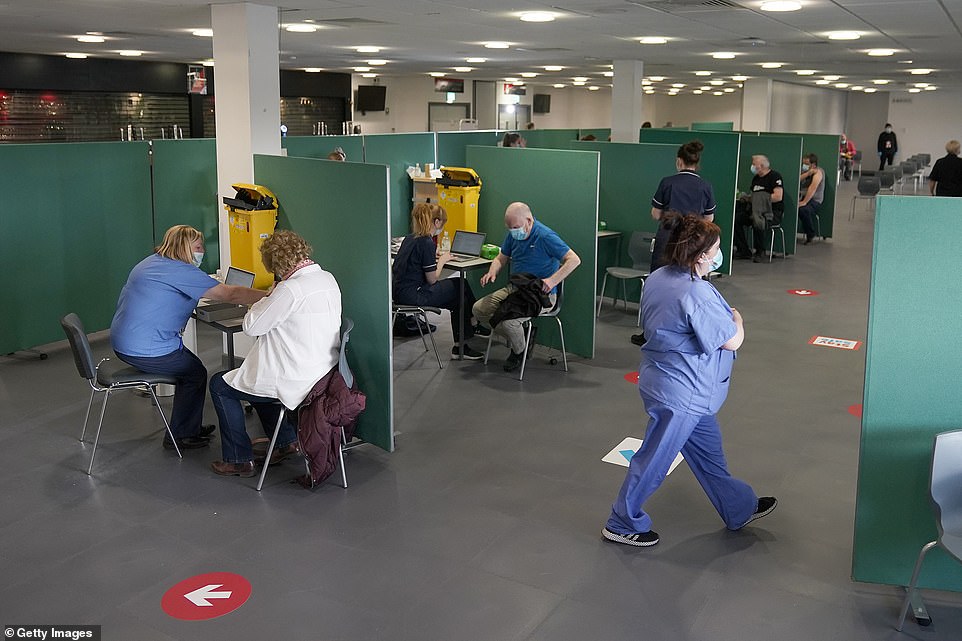 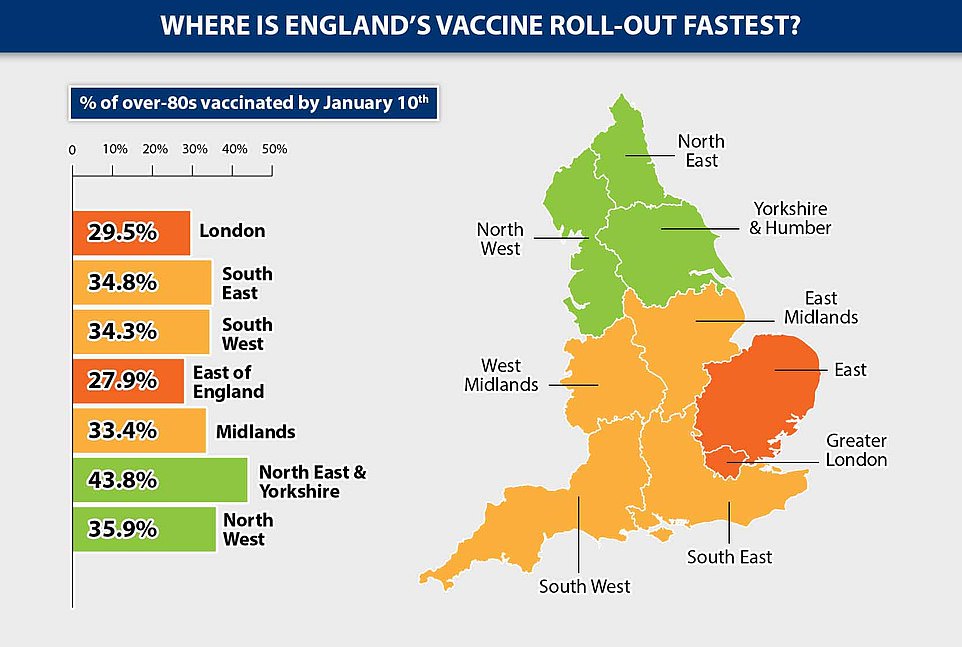 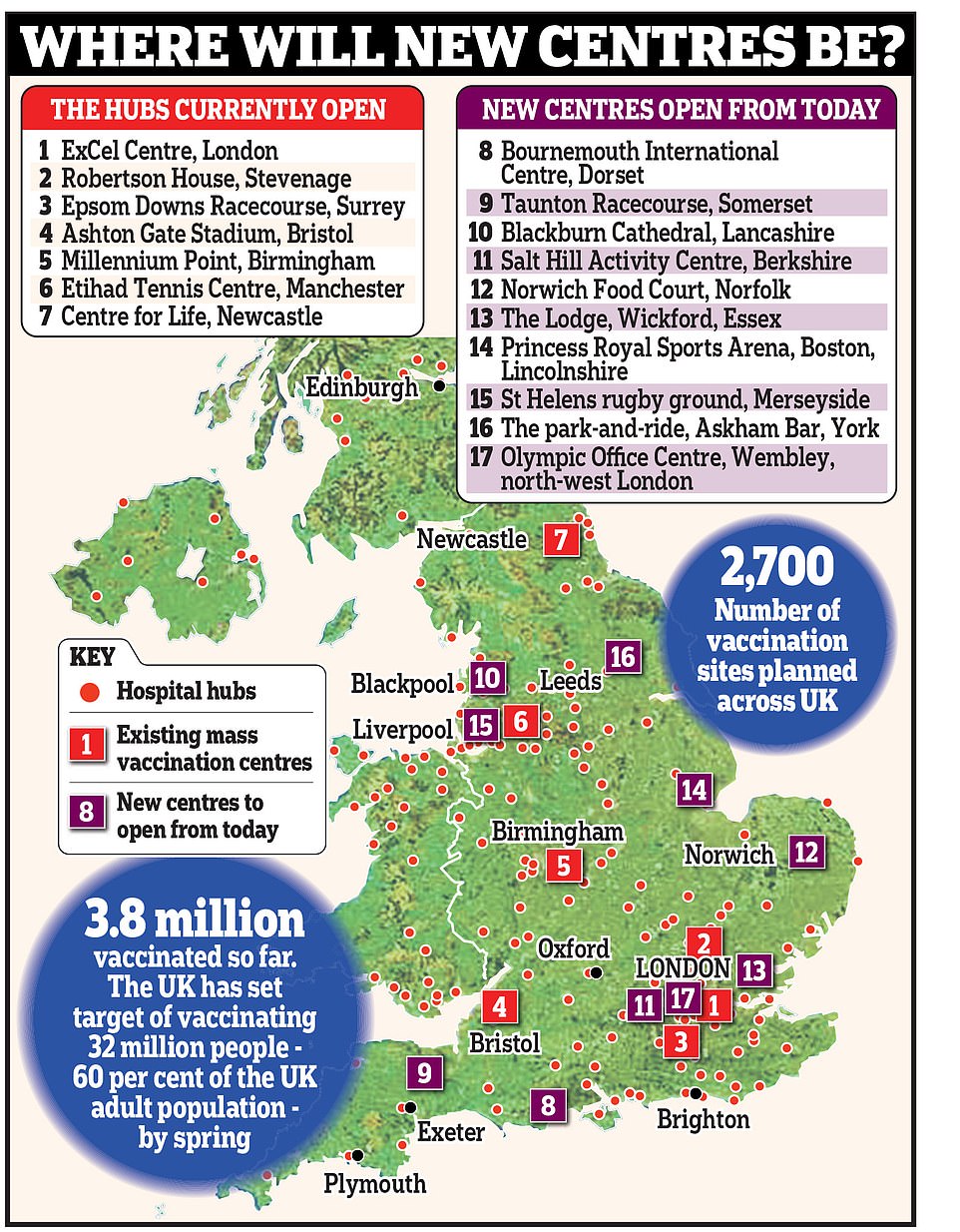 Vaccines minister Nadhim Zahawi was bullish about the longer date in a round of interviews this morning, and also struck an optimistic tone about the prospects of easing lockdown from early March.

However, he also risked fuelling fears about a lack of fairness by confirming that people in their 70s will only be offered jabs in areas where ‘the majority’ of over-80s have already had their first shot. That could disadvantage areas such as London, where progress has been slower.

Meanwhile, all care home residents and most of their carers have already had their first shot in Newcastle, but the NHS-led programme in rural Suffolk is struggling to speed up. And a GP surgery in Kent has had to pause its vaccination because of supply problems.

Cabinet minister Therese Coffey complained this morning that in her constituency some individuals in their 70s were being offered jabs ahead of the more elderly. ‘Vaccinations started well in Suffolk Coastal in the last few days, but something isn’t quite right as in some places, patients aged 70+ are being contacted for vaccination ahead of 80+/90+ year olds,’ she tweeted. ‘Am following up with local NHS.’

Mr Zahawi also had to reassure the public that all second doses of vaccines will be given within 12 weeks of the first – after Foreign Secretary Dominic Raab refused to confirm yesterday that would be the case.

The wrangling came as letters started going out to people in England in the next two priority groups.

That includes 4.6million in their 70s plus another one million classed as ‘clinically extremely vulnerable’ because they have conditions affecting the immune system, certain cancers or are organ transplant recipients.

In London vaccinations have been trailing behind the rest of the country, with Tory MPs voicing alarm that the supplies were being based on take-up of the flu vaccine last winter.

Health Secretary Matt Hancock said yesterday that the nation was ‘nearly on the home straight’ as 50 per cent of all over-80s in England have been vaccinated.

Some 140 a minute are receiving a jab, putting Britain on course to vaccinate all adults by early autumn. However, one coronavirus patient is being admitted to hospital every 30 seconds. 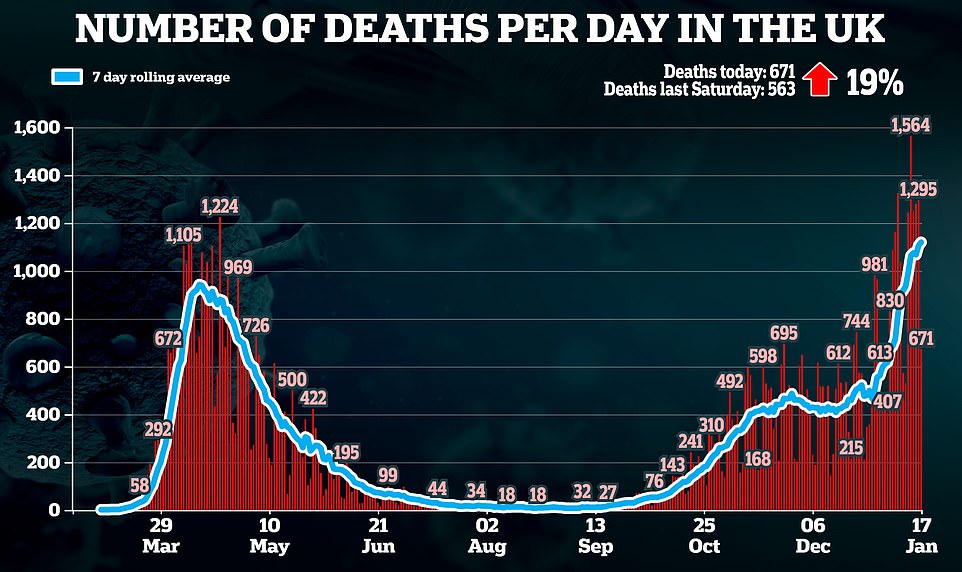 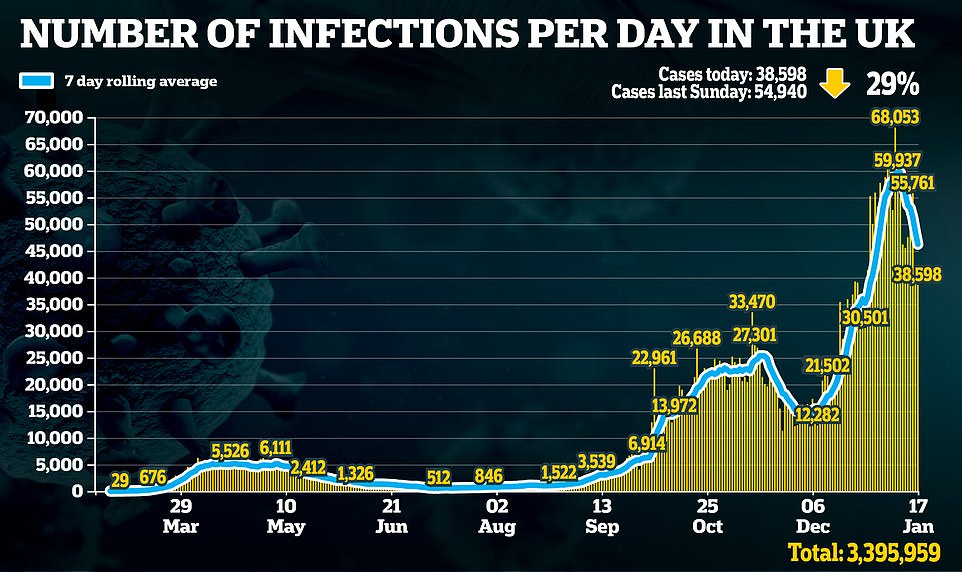