Cases of the Indian ‘Delta’ Covid variant in England have more than tripled in a week from 12,431 to 42,323 and the strain appears to be spreading 64 per cent faster than the Kent variant, health chiefs confirmed today.

Britain’s vaccine minister Nadhim Zahawi hinted at a delay to the end of the lockdown roadmap when he said the UK must not ‘squander those hard fought gains that we have made through the vaccination programme’.

Mr Zahawi said No10 would have to be ‘really careful’ when moving forward now so the country can avoid the virus bouncing back and triggering a massive third wave or mutating again.

It is now almost certain that Boris Johnson will delay the ‘Freedom Day’ end of restrictions slated for June 21, which could have seen crowd limits lifted at large events, weddings and bars. The PM is keeping his cards close to his chest but ministers have been dropping hints that he will delay, to the despair of business and hospitality leaders who are desperate for a normal summer to recoup losses from the past 18 months.

Despite worries that cases and hospital admissions are on the rise – and a spike of more than 29,000 cases identified in just a week – Public Health England published promising data today showing that vaccines are working well at protecting people from the Delta strain.

Its figures show that only one in 10 people admitted to hospital after getting infected with the variant had been given two doses of a vaccine  – just 42 out of 383 – while the rest of them had either had one jab or none at all.  Twelve out of 42 people to have died of the strain had been vaccinated and just 1,785 out of 33,206 infections were in double-jabbed people.

Vaccines are now likely the only thing that can keep Britain out of another lockdown but there are concerns that not enough people are fully protected and that supplies will be spread thin over the coming weeks after appointments opened up to under-30s this week for the first time and a million booked jabs on Tuesday alone.

Mr Zahawi said supplies of Pfizer – which is used for everyone under 40 and also for around half of older people’s second doses – will be ‘tight but stable’ in June as the rollout steams ahead.

PHE’s report cautioned that a single dose of vaccine only appears to offer 33 per cent protection against illness from this variant, down from 50 per cent with the Kent strain, but two doses remain highly effective at an estimated 81 per cent down from 88 per cent. 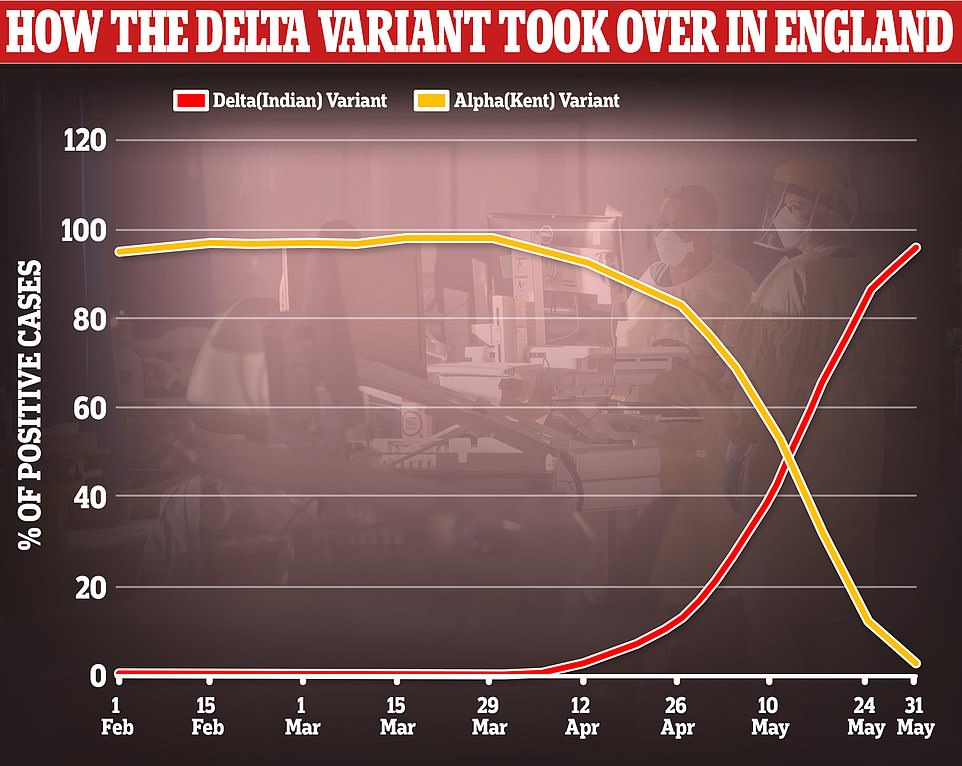 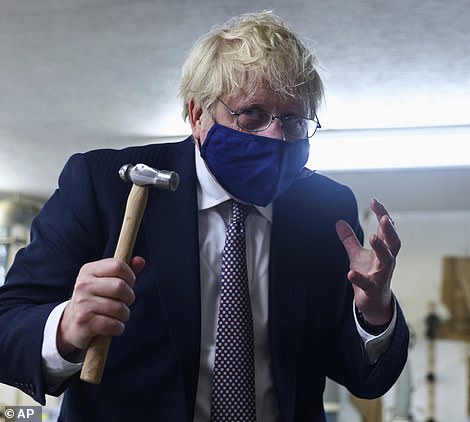 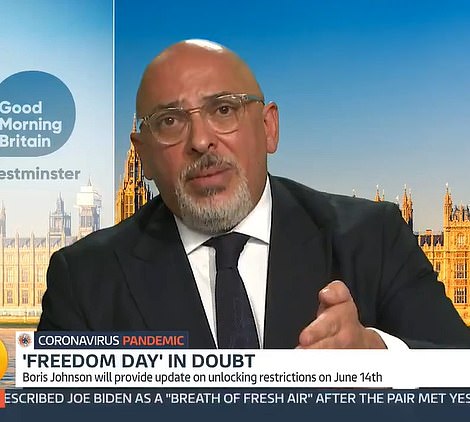 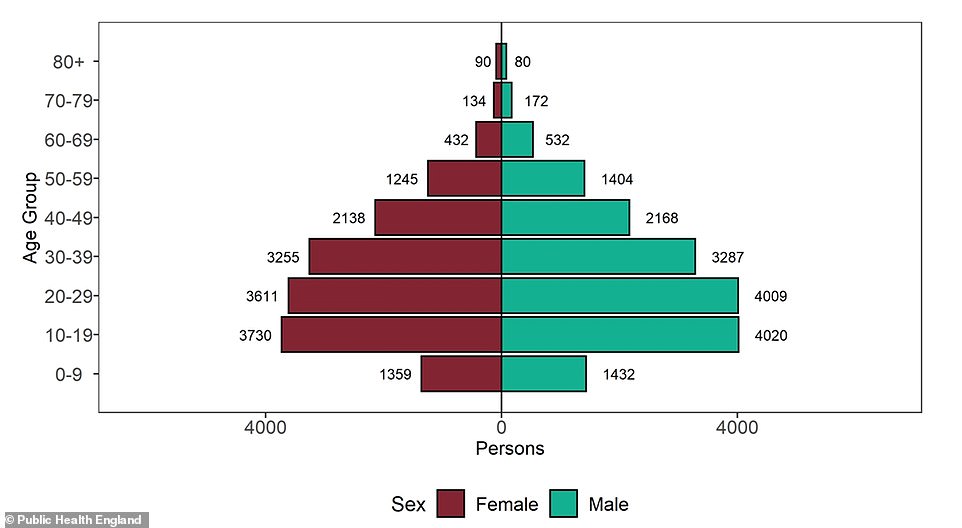 Most Delta cases have been in young adults and teenagers, who are unvaccinated, while there have been significantly fewer positive tests in older people, particularly over-50s, most of whom have had two doses of a jab. The true test of the vaccine will be whether the age distribution stays this way as the outbreak gets larger 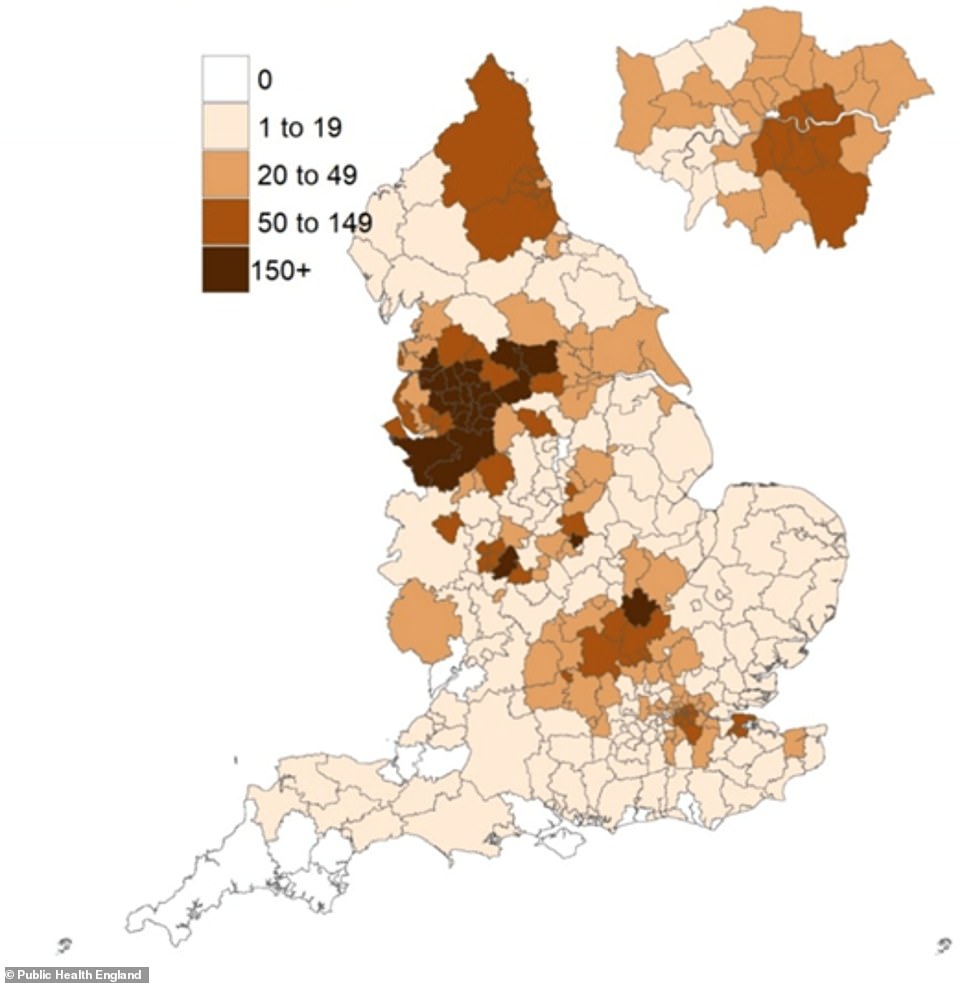 This heat map shows the hotspots for positive test samples that scientists believe are the Delta variant, with the most cases concentrated in the North West around Manchester and Liverpool

The vast majority of cases and hospital admissions triggered by the Delta variant have been in people who were unvaccinated, PHE’s data show. The figures show that only one in 10 people admitted to hospital after getting infected with the variant had been given two doses of a vaccine – just 42 out of 383 – while the rest of them had either had one jab or none at all. Twelve out of 42 people to have died of the strain had been vaccinated and just 1,785 out of 33,206 infections were in double-jabbed people 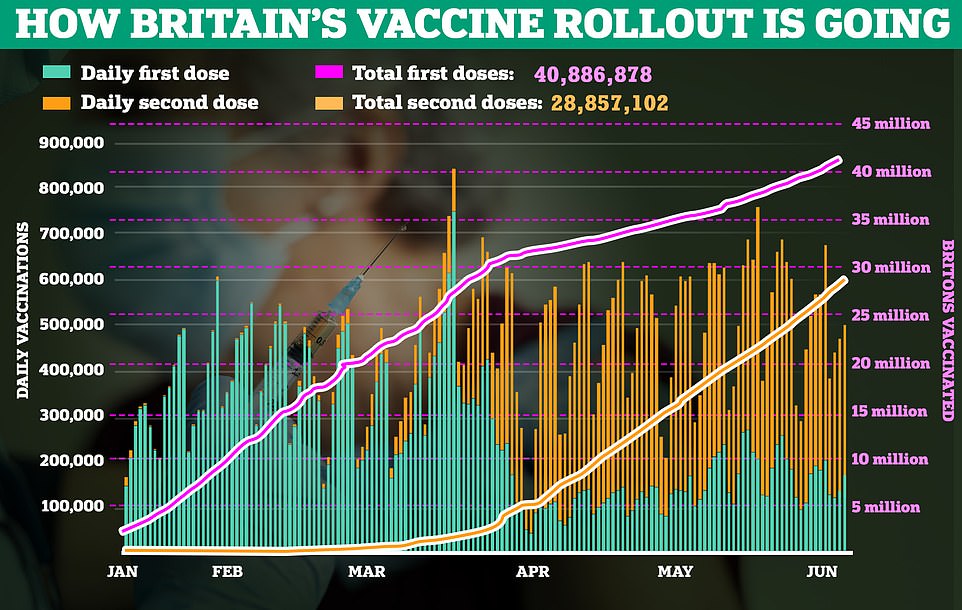 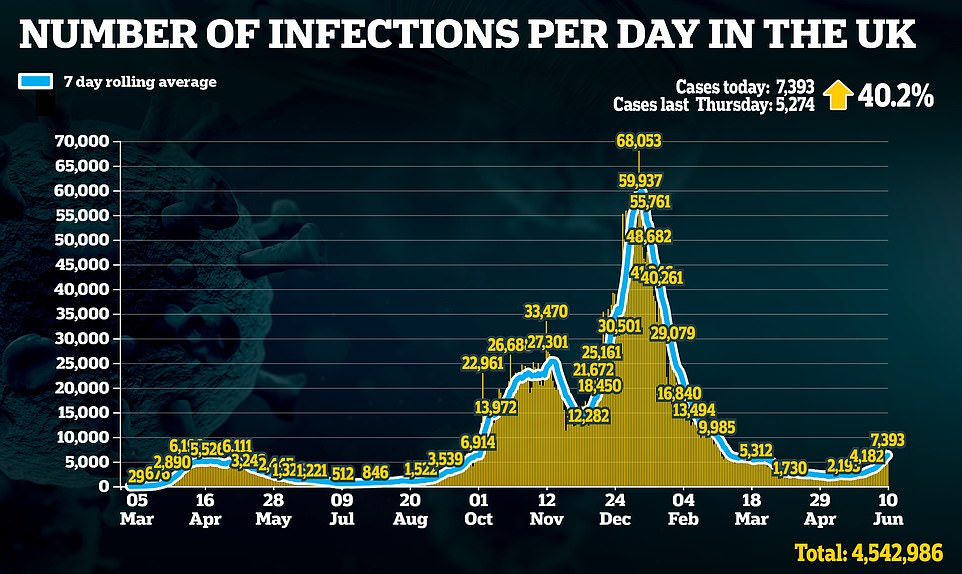 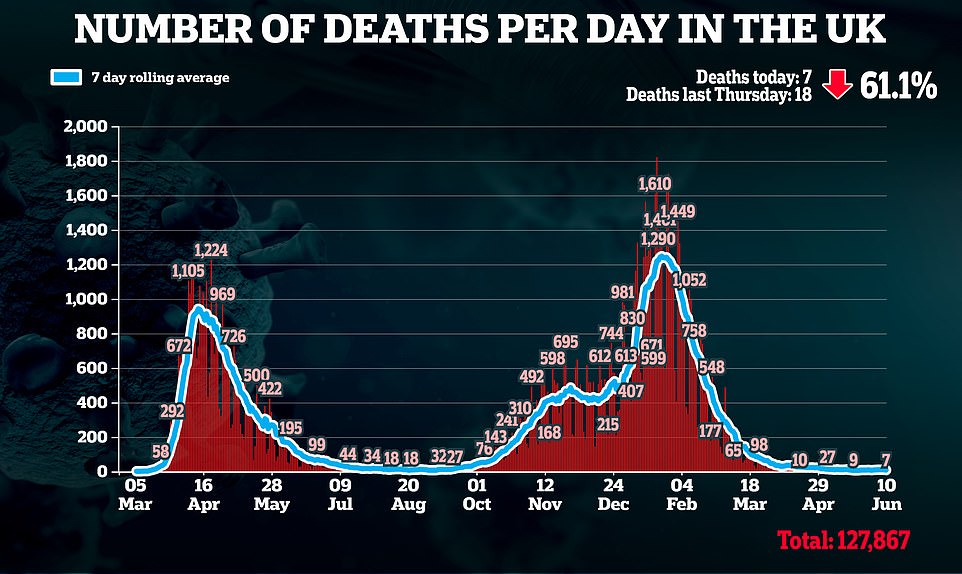 Mr Zahawi said on Times Radio: ‘There has been some really hard won battles against this virus and we don’t want to squander those hard fought gains that we have made through the vaccination programme. The virus hasn’t gone away, the virus will continue to mutate, to escape, to try and survive, and I think it’s really important that we are really careful.’

He said that supplies of the Pfizer jab, which is being used for everyone under the age of 40 as well as for second doses for around half of older people, were going to be ‘tight’ in the coming weeks as the rollout rattles ahead.

People in their 20s were invited to book vaccine appointments for the first time this week and clamoured for the jabs with more than a million people getting booked in on Tuesday alone – a one-day record for the NHS.

The minister said on LBC: ‘Every time I’ve said the determining factor in terms of vaccine in arms is supply. And supply remains finite, but it is stable, and Pfizer have done a great job in being consistent on their delivery schedule.’

It is believed that ministers are still considering keeping some curbs in place for a further two to four weeks to buy more time for the vaccine programme amid mounting concern about the spread of the Indian variant.

While an exception is likely to be made for weddings, ministers have become increasingly pessimistic over the course of the week and are now moving closer to a delayed freedom day that could coincide with the start of the school summer holidays.

The Pfizer supply setback comes as a particular blow as it makes the prospect of speeding up the vaccine roll-out to meet demand much more difficult.

Scottish MP Humza Yousaf told Matt Hancock in a letter that supplies of the Pfizer jab are to be ‘particularly tight over the next few weeks’, not just in Scotland but across the UK, according to the i newspaper.

Mr Yousaf’s fears are the result of the updated advice published the Joint Committee on Vaccination and Immunisation last month, which said that under-40s should be given Pfizer or Moderna jabs rather than the AstraZeneca equivalent due to concerns over a small risk of blood clots in younger patients. 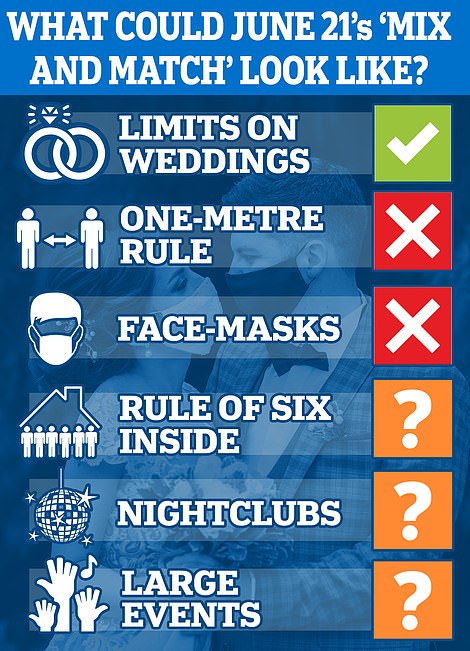 And with thousands of under-30s now receiving jabs after the vaccine roll-out picked up pace, demand for doses of Pfizer has now soared beyond supply levels.

Figures showed Covid-19 case rates have increased across every region in England in the past week. But hospital admissions have only increased fractionally – while deaths are up by just 1.9 per cent on the previous week.

NHS bosses have said vaccines appear to have broken the link between rising cases and hospitalisations. Those that are admitted are often younger and less sick than during previous waves.

According to NHS data published yesterday, more than 85 per cent over-50s in England – considered the age group most at risk – have now had two vaccine doses.

If the NHS in England continues to give doses to 1.3million over-50s a week, everyone in that age bracket should be fully vaccinated by the time all remaining covid curbs are due to ease. 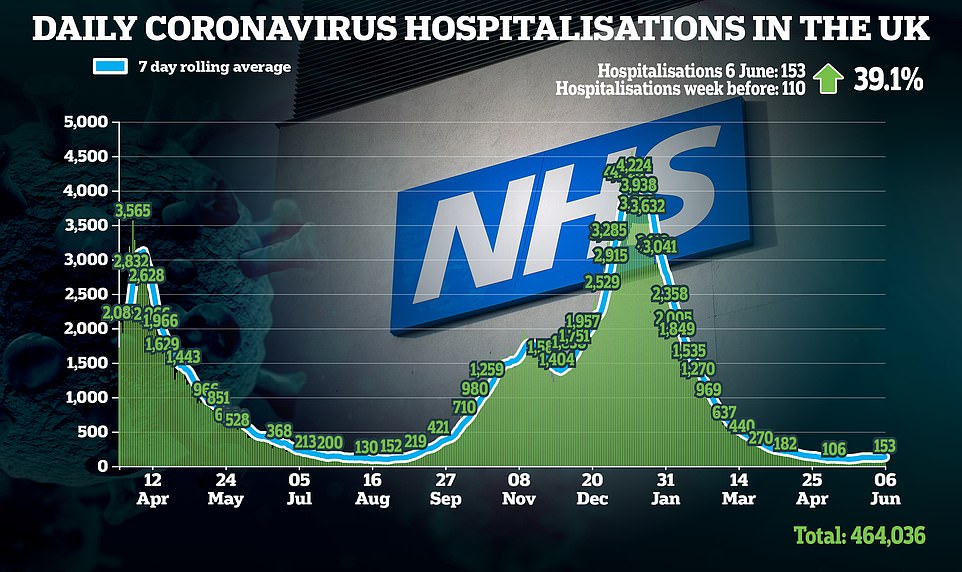 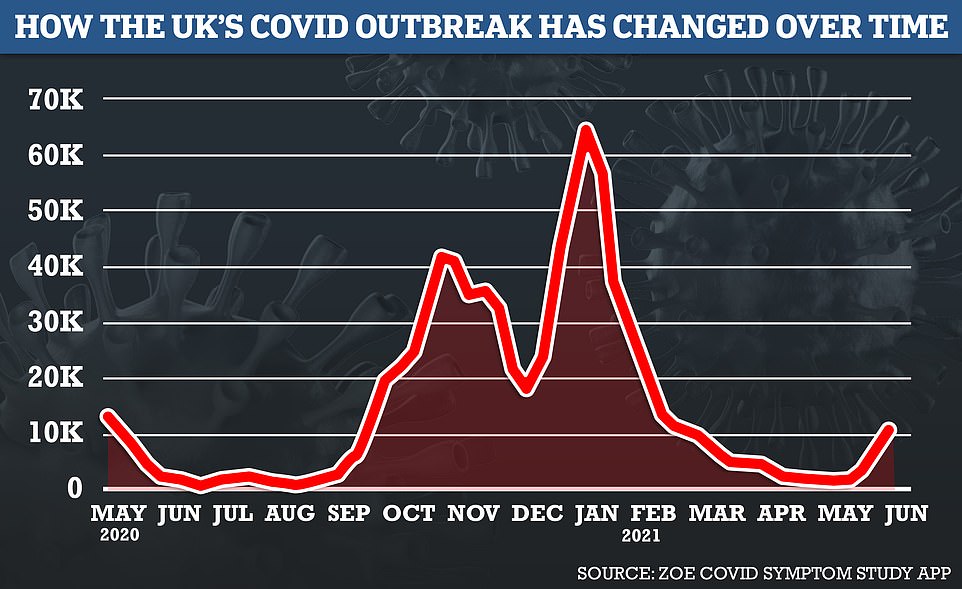 The number of people falling ill with Covid has more than doubled in a week, a symptom-tracking study warned today amid the rapid spread of the Indian variant across the UK 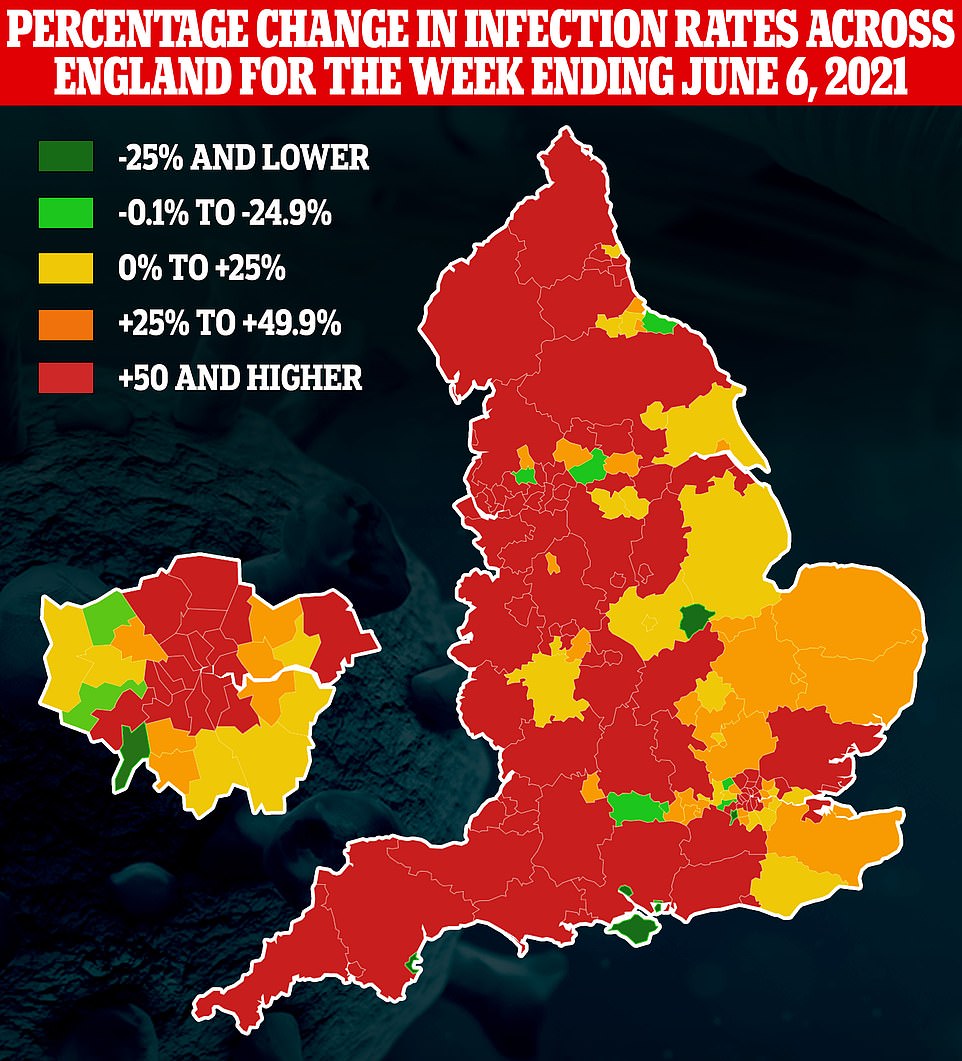 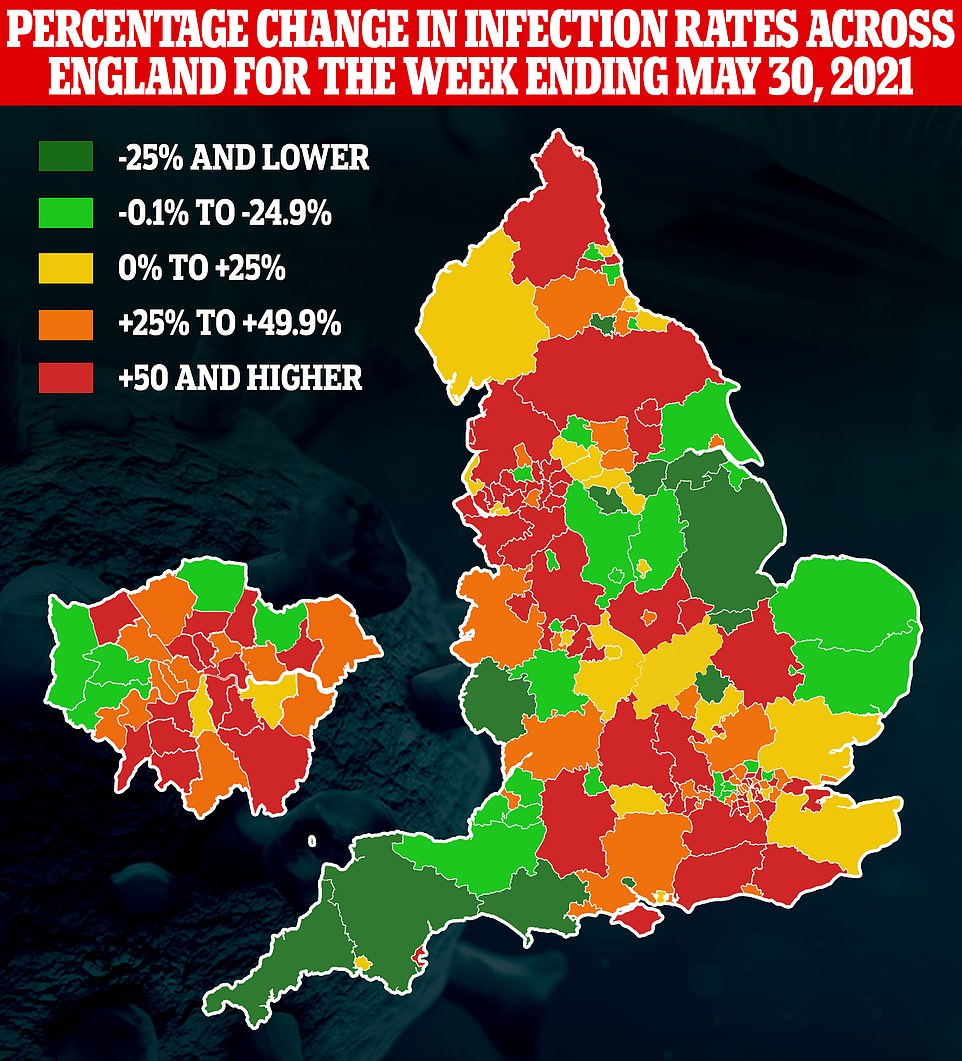 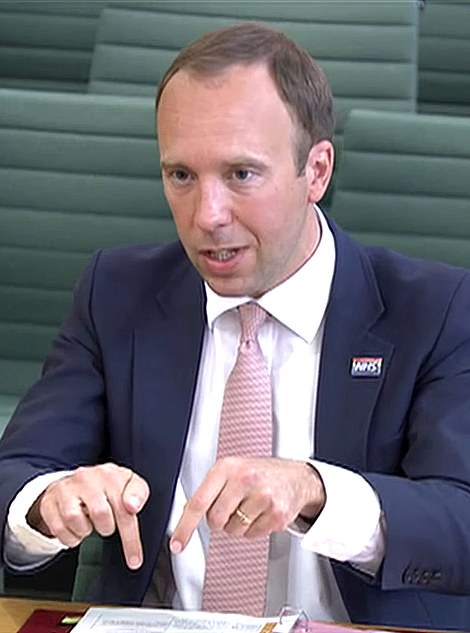 Boris Johnson is expected to decide whether England can go ahead with the full re-opening on June 21 at a meeting in Downing Street on Sunday evening, following the conclusion of the G7 summit in Cornwall.

Then, after flying to Brussels on Monday morning to attend a Nato summit, he will return to London in the evening to address the nation.

The Government is planning to lift the 30-person limit on weddings, Whitehall sources confirmed last night.

But they insisted the Prime Minister is still undecided about the wider lifting of measures including social distancing rules and work-from-home advice.

Yesterday, the UK recorded 7,393 new coronavirus cases and seven deaths within 28 days of a positive test. Infections have risen 63 per cent in the past seven days compared to the week before.

But the number of hospital admissions has remained steady and the average number of deaths each day has stayed below ten.

Dr Jenny Harries, chief executive of the newly-created UK Health Security Agency, said the country was going ‘not quite in the right direction’ and data suggested there would be a further rise in infections in the coming weeks.

But the health chief said the figures suggested that those aged 60 and above are not getting ill because they are ‘doubly vaccinated’.

She added that those appearing in hospital are either unvaccinated or have had a single dose.

The Prime Minister’s spokesman said: ‘The point of the five-week gap between the steps [in the roadmap] is for us to analyse the data. That’s exactly what we’ve been doing, and we will continue to do so… ahead of saying something early next week.’