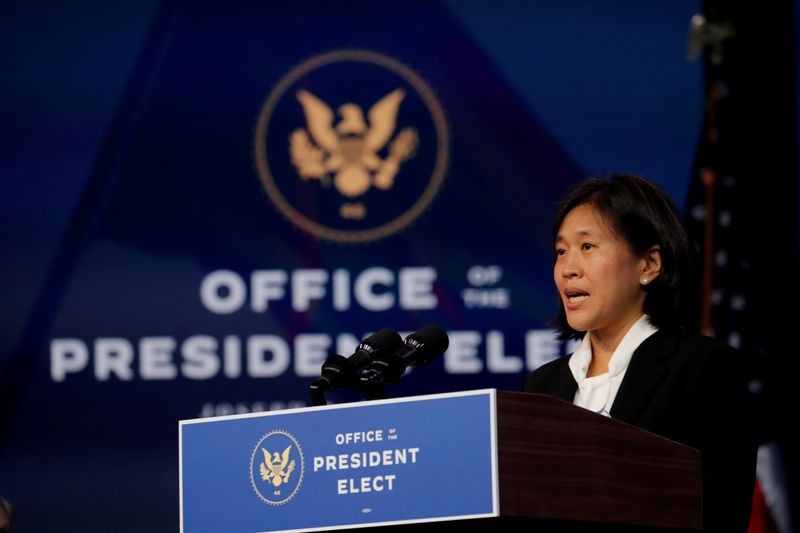 By David Lawder and Andrea Shalal

WASHINGTON (Reuters) – Katherine Tai, President Joe Biden’s pick to revamp U.S. trade policy to focus on workers and “ordinary Americans” over corporations, will get a chance to explain what that will mean in practice at her confirmation hearing on Thursday.

Tai’s testimony before the Senate Finance Committee has been anxiously awaited for months by industry, U.S. trading partners from Beijing to Brussels, labor groups and lawmakers – all in a long queue to lobby Tai as soon as she is confirmed.

Tai, the top trade lawyer for the House of Representatives Ways and Means Committee, is seen as a tireless and unflappable negotiator, deeply knowledgeable about China, who recently won praise for getting tougher labor and environmental standards added to the U.S.-Mexico-Canada trade deal.

She has been guarded about her specific plans, but industry officials and congressional aides say one thing is clear – she will add labor concerns to the equation.

In January, Tai told the National Foreign Trade Council that U.S. trade policy must be “worker centric,” focusing on people as wage earners and not just consumers – a key message repeated often by other top Biden economic policy experts.

In Geneva, the U.S. delegation recently spoke up with concerns about Myanmar’s record of violating labor rights and using forced labor – a statement administration officials say reflects an increased focus on workers at home and abroad.

The incoming director of the World Trade Organization, Ngozi Okonjo-Iweala, said Biden’s trade officials agree with her about the need to make trade relevant to everyday people to rebuild confidence in the global trade body and the global economy.

While Britain, Kenya, Japan and others are clamoring for new or expanded trade deals, the Biden administration has put any new negotiations on hold until after a comprehensive review of all Trump trade policies.

For now, Tai will focus on enforcing existing trade deals, including provisions aimed at protecting workers that she herself helped add to the U.S.-Mexico-Canada trade deal.

One European official said Brussels was waiting to see how Tai will implement Biden’s pledge to rebuild ties with allies.

“We hope to start seeing the first signs of how she will make this happen. And of course: putting disputes to bed ASAP,” the official said, referring to tariffs on steel and aluminum, and aircraft, and digital services taxes that Trump put in place or threatened.

“Her job … will be to reassure the senators she’s going to be tough on the other countries that are taking advantage of us,” said William Reinsch, a trade expert at the Center for Strategic and International Studies in Washington. “She will be expected to take a hard line on China,” he said.

Senate Finance Committee Chairman Ron Wyden has pledged to move Tai’s nomination quickly, which means she could get a Senate vote by next week or the following week, making her the earliest USTR confirmed in the job since the early 1990s.

Harry Broadman, managing director at Berkeley Research Group, said the huge interest in Tai’s hearing reflected the growing importance of trade to the U.S. economy. “It’s a sign of the times. People are very eager to get her on board,” he said.

“When it comes to trade actions and negotiations, I have no doubt that Katherine will be in the driver’s seat,” he said.

Corey Graves: “I think NXT could use a little injection of personality”

Corey Graves: "I think NXT could use a little injection of personality"

‘There’s a lot that’s been lost’: Meghan slams The Firm for ‘perpetuating falsehoods about us’

KUWTK: Kim Kardashian Will Most Likely Keep The $60 Million Mansion She Used To Share With Kanye West After Their Divorce – Here’s Why!