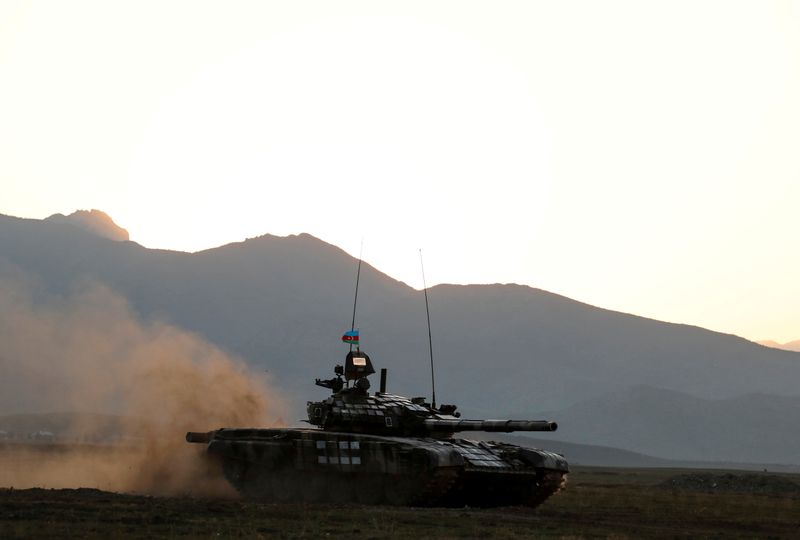 © Reuters. FILE PHOTO: Azerbaijani soldiers maneuver with a tank during a training at a military training and deployment center near the city of Ganja

YEREVAN/BAKU (Reuters) – Armenia acknowledged overnight that Nagorno-Karabakh forces had withdrawn from a strategic town between the enclave and the Iranian border, an apparent military gain for Azerbaijan as a new U.S.-brokered ceasefire failed to end a month of fighting.

Azerbaijan, an ally of Turkey, has been trying since to recapture Nagorno-Karabakh, a breakaway region populated and ruled by ethnic Armenians. The worst fighting in decades in the area has killed hundreds of people and risks sucking Turkey and Russia into a regional conflict.

Armenian defence ministry official Artsrun Hovhannisyan said in a news conference late on Monday that ethnic Armenian forces had given up the settlement of Gubadli south of the enclave “to avoid unnecessary losses”, but the situation was “not critical”.

Azerbaijan’s military gains could make a diplomatic solution more difficult. It and Turkey reject any proposed solution that allows Armenians to remain in control of the enclave. Armenia says it will not withdraw from territory it views as part of its historic homeland, where the population needs protection.

The two countries agreed to a ceasefire on Sunday when their foreign ministers separately met U.S. Secretary of State Mike Pompeo in Washington. But the truce seems to have had little impact; two previous ceasefires brokered by Russia were largely ignored.

“The situation in the conflict zone remained relatively stable and tense throughout the night. Artillery duels continued in some areas,” Nagorno-Karabakh’s defence ministry said.

It said in a statement that shells had landed in the towns of Martuni and Martakert, as well as villages in the northern part of Askeran region.

Azerbaijan’s defence ministry said in a statement that its military positions and settlements near the front line had been fired upon and that combat continued mainly in the Khojavend, Fizuli and Gubadli regions.

The OSCE Minsk Group, formed to mediate the conflict and led by France, Russia and the United States, is scheduled to meet the Armenian and Azeri foreign ministers in Geneva on Oct. 29. Turkey has demanded a bigger role in the mediating body.

Joe Biden campaigns in the new battleground state of Georgia