Apache has a well-publicized offshore exploration program in Suriname where, pursuant to a joint venture agreement with Total SE (NYSE: TOT), it is involved in the exploration and development of Block 58 offshore Suriname. Apache holds a 50 percent working interest in approximately 1.4 million acres in Block 58 where water depths range from 100 meters to more than 2,000 meters.

Apache’s share price is well supported by the asset value of existing producing operations in the U.S., Egypt and the North Sea. An analysis of share price performance in the last year strongly suggests there is little to no value for a significant discovery in Suriname in the share price. With the Keskesi-1 well underway and appraisal of the Sapakara well in progress I believe it is likely that investors will get news on the size of Apache’s Suriname discoveries relatively early in the New Year.

As a result I believe Apache is worth buying at these levels, or perhaps, initiating a net long position buying Apache and shorting 50% to 70% of the long dollar value in S&P Exploration & Production ETF (NYSE: XOP) to partly hedge against continued weakness in macro factors impacting the sector.

The company has announced three discoveries in 2020: 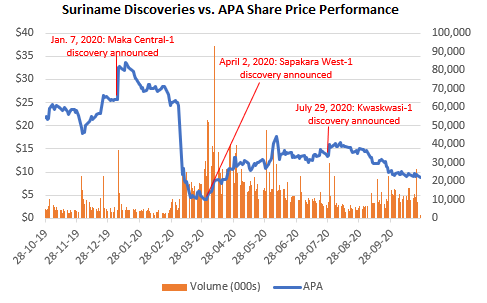 While the share price did react positively to news, the impact on the share price has proven fleeting. When viewed in context of the sector, represented by the S&P Exploration & Production ETF (NYSE: XOP), it seems that investors are giving little (if any) value to the potential impact of the exploration program in Suriname. 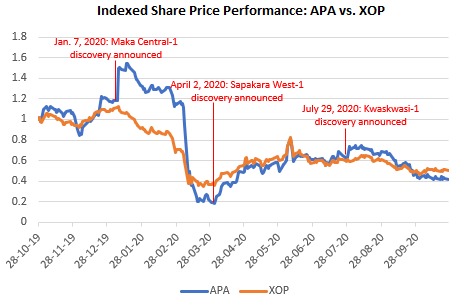 While the market seems to have built in some expectations regarding developments at Block 58 following the January 7, 2020 announcement regarding the Maka Central-1 discovery, the onset Covid-19, the resulting recession and collapse in oil prices quickly washed this away. The subsequent announcement in April helped Apache catch up with the sector and the July announcement did give Apache a fleeting boost vs. the XOP.

Given that Apache shares have slipped back below the sector, it seems that investors are not willing to give Apache shares any sustainable premium for as yet unknown upside in Suriname. The list of investor concerns is lengthy: concerns over near-term oil prices; emergence from the Covid-19 induced recession; long-term outlook for oil and gas; with respect to Apache in particular, high debt levels and limited free cash flow.

Indicators of Potential in Block 58

Despite this negative backdrop I am very bullish on the potential in Block 58. I am not a geologist or petroleum engineer but I believe there are several considerations that support a bullish view on Block 58 potential:

Given that Apache is drilling next to a set of discoveries in Guyana that have made headlines world-wide, I do not see how Apache could consider Block 58 to be world class if they did not think they would be looking at 1 billion+ barrels collectively on the discoveries announced YTD2020.

The following map by Hess Corporation (NYSE: HES) shows the discoveries in the Stabroek block in neighboring Guyana waters: 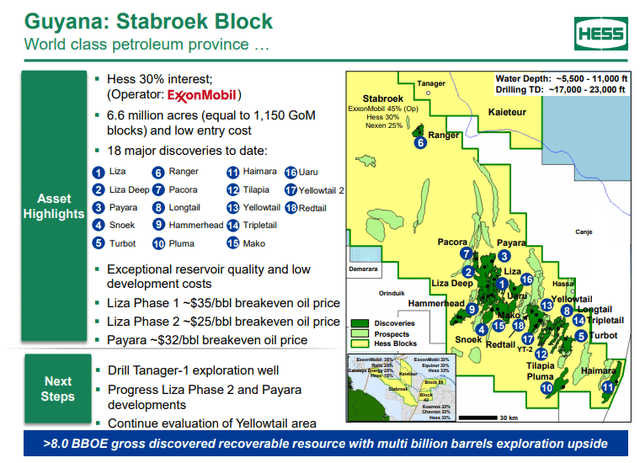 In the following map the discoveries by Apache and Total are highlighted. I added the notation “Stabroek” in bold red to Apache’s map. 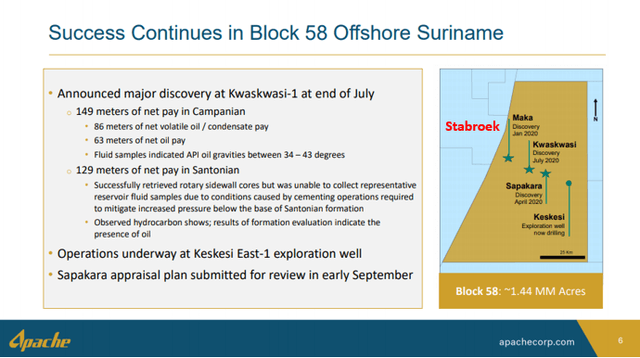 What Could It Mean For Investors?

The following table summarizes the potential value to Apache of different sized discoveries (or cumulative discoveries) in Block 58 assuming $50 oil (Brent Crude) and a $35 all-in cost per barrel (my assumption, based on Liza-1 break-even cost per barrel as reported by Hess).

Source: All calculations by Author.

It also seems likely that if/once Apache has announced something tangible from its Block 58 exploration program the market may attribute value in excess of the PV value of the discoveries.

A discussion of the JV with Total, the Production Sharing Agreement and methodology used in calculating the above table can be found in my Seeking Alpha Blog.

The key near term risk for Apache shares is oil price which itself will be impacted by the severity of any increase in Covid infections, resulting delays in resuming full economic activity, as well as, increases in supply in coming months. Continuing investor disfavor of the sector and potential negative impacts of a change in U.S. energy policy are also risks to Apache.

Despite the risks, a substantial discovery, 1 billion barrel + discovery, in Block 58 will be a game changer for Apache and provide significant upside and ongoing outperformance to Apache’s share price. A $3 to $5 increase in NAV per share is significant to a sub-$9 share price. Such an increase in asset value will ease liquidity constraints and make financing future development costs easier. Significant volatility should be expected between now and when full appraisal results are released by Apache. The shares will likely continue to trade with the sector but Apache is a buy for speculative investors who are bullish on the potential of Block 58. I like Apache because of the upside in Suriname, the E&P sector continues to face significant headwinds. For those investors not opposed to holding a short position my recommended way to play this is long Apache, short 70% dollar value in XOP.

Disclosure: I/we have no positions in any stocks mentioned, and no plans to initiate any positions within the next 72 hours. I wrote this article myself, and it expresses my own opinions. I am not receiving compensation for it (other than from Seeking Alpha). I have no business relationship with any company whose stock is mentioned in this article.